Written by Todd Shimikus, President of the Saratoga County Chamber of Commerce
Rate this item
(0 votes) 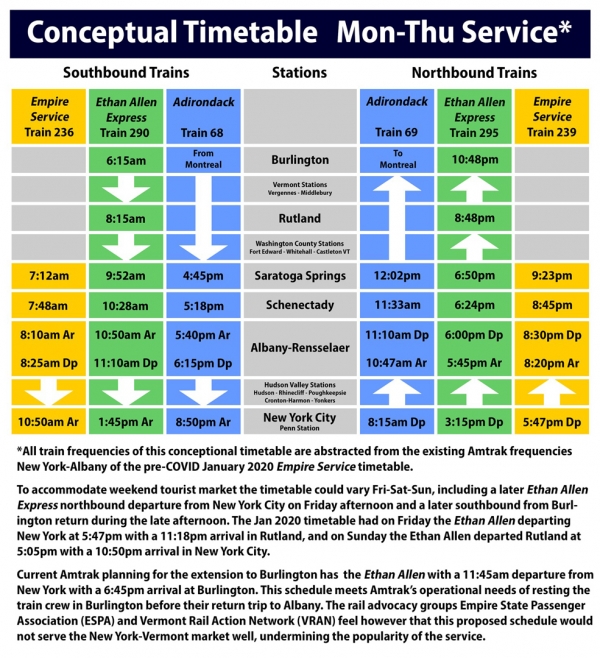 SARATOGA SPRINGS — Here’s something to look forward to in 2022. We will all be able to take an Amtrak train from Saratoga Springs to Burlington, VT, and back, of course. The ride itself will take a little over three hours. This will all be possible because the State of Vermont is investing in the infrastructure to extend passenger rail service from Rutland to Burlington.

According to Cathy Davis, the President of the Lake Champlain Regional Chamber, in Burlington, the late US Senator Jim Jeffords worked hard to bring resources from Washington D.C. to make this a reality. During a recent event at the Saratoga Springs train station, Cathy said: “This investment will create great opportunities for both of our regions. We both enjoy vibrant and walkabout downtowns. When connected by rail, there will be even more commerce between Saratoga and Burlington. This will allow visitors to more easily reach our destinations. I look forward to seeing Todd Shimkus hop off the train next year in Burlington.”

I also look forward to Cathy hopping off the train here in Saratoga. Our two chambers of commerce have already begun talking about what we can do to make this connection work for our hospitality sectors. One likely project will involve us putting together travel packages from Burlington to Saratoga County that Cathy and her team will promote to their members and their employees. Likewise, they will organize travel packages for Saratoga residents to visit Burlington that we will promote.

When Cathy spoke about expanding commerce, the talk quickly turned to GlobalFoundries. The company’s headquarters is now in Malta. A significant percentage of their 3,000 employees live in Saratoga County. The company also has operations in Burlington. This means their employees here and there often travel between our two communities. This is a commute that now must be done by car.

“GlobalFoundries has semiconductor manufacturing facilities located near both Saratoga Springs, New York, and Burlington, Vermont, which will be well served by the restart of the Ethan Allen train line and extension into Burlington,” said Laurie Kelly, Vice President, Global Communications, GlobalFoundries. “We support the efforts of the Empire State Passenger Association, the Saratoga County Chamber and Lake Champlain Chamber, and are excited that our GF employees will soon have the opportunity to travel easily by passenger rail between our sites.”

Besides the work being done by the State of Vermont, we hope that the State of New York will also invest more in rail service to and from Saratoga. For instance, the extension of the Empire Service to Saratoga Springs could allow a train to be heading south from our City much earlier in the morning.

According to the Empire State Passenger Service, a train leaving Saratoga at 7:12 a.m. would arrive in Schenectady 36 minutes later. The same train would be at the Albany/Rensselaer Train station by 8:10 a.m. That’s less than one hour to Albany. The travel time of this train is very similar to the time it takes a commuter to travel from Saratoga to Schenectady by car or bus.

With train service already heading back to Saratoga from these two cities after 5:00 p.m., it’s possible to create a “commuter rail option” for people who live here but work in Albany, Schenectady or Troy. Given a little flexibility with schedules, we could also use passenger rail to attract talent from these three cities within our region to Saratoga.

As now structured, Amtrak is a contract service provider for passenger rail service to the State of New York. If New York invests is willing to pay Amtrak to extend service, they are more than willing to do so. So our ability to make this happen rests with the New York State Department of Transportation.

During our recent event to talk about expanding rail services, we were joined by Senators Daphne Jordan and Jim Tedisco as well as Assemblywoman Carrie Woerner. Each spoke positively about these two investments and the economic opportunity they represent. We look forward to working with them in the coming weeks and months as we seek to start a new dialogue with the State of New York. One that is focused on making us stronger together by connecting Troy, Albany, Schenectady, Saratoga Springs, Rutland and Burlington by passenger rail. All aboard!

By Todd Shimikus, President of the Saratoga County Chamber of Commerce