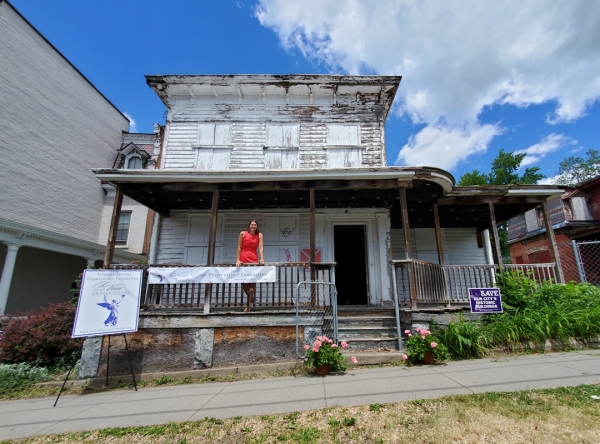 SARATOGA SPRINGS — The Saratoga Springs Preservation Foundation announced last week it had purchased a long-neglected building at 65 Phila St., which will now be revived.

The Foundation has advocated for the preservation of 65 Phila Street since the inception of its endangered buildings list in 1998.  The 1851 Italianate style house clad with wood clapboard located at 65 Phila Street was constructed by Alexander A. Patterson, an architect and builder.  That same year the brick Italianate style house located at 69 Phila Street was constructed by mason Robert Hunter.  Both houses are listed as contributing buildings to the East Side Historic District listed on the National Register of Historic Places.

The Foundation opposed the owner’s proposals to demolish both, the 65 and 69 Phila Street buildings. The latter building has since been sold to new owners who plan to restore it, according to SSPF.

Mark Haworth, an investor and a member of the Foundation, had an interest in preserving the buildings.  He provided the necessary low-interest financing to allow the Foundation to acquire the property for $235,000.

“Our goal is to make it safe for future owners and the neighborhood, something that is long overdue,” said Samantha Bosshart, Executive Director of the Saratoga Springs Preservation Foundation, in a statement. The Foundation plans to start with environmental remediation, necessary structural repairs, and a new roof.  Construction costs have risen significantly in the last 18 months so the Foundation will lean on the community for financial and in-kind support in addition to utilizing funds they have raised over the past few years to undertake a special project such as this.

The Foundation’s initial goal is to raise $250,000, the preliminary estimated cost to complete the identified scope of work. The Foundation recently raised $50,000 to restore the most at-risk stained-glass windows at the First Baptist Church and $475,000 to restore the Spirit of Life & Spencer Trask Memorial in Congress Park in partnership with the City of Saratoga Springs.

To support the Foundation’s efforts to Revive 65 by making a donation or becoming a member, visit www.saratogapreservation.org or call 518-587-5030.

Read 39 times Last modified on Friday, 04 June 2021 14:39
Tweet
Published in News
More in this category: « “Into the First Turn”: Saratoga Race Course to be Depicted in Jigsaw Puzzle Illustrated by Local Equine Artist Sharon Crute Summer Work is a Great Opportunity for Teens »
back to top