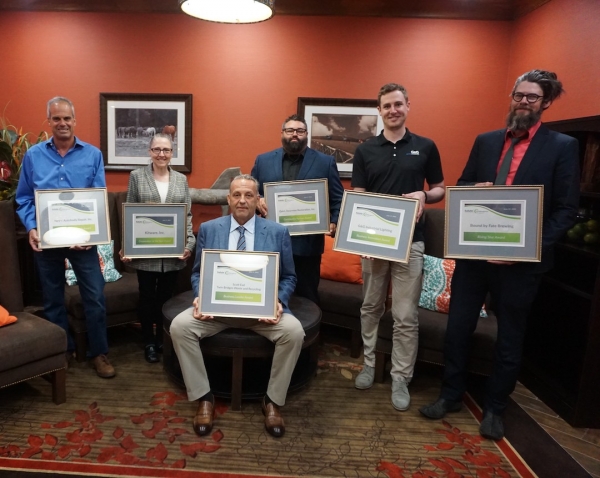 The 2021 Salute to Business award winners.

The Chamber of Southern Saratoga County (CSSC) welcomed the post-Pandemic era with its first “Salute to Business” awards night since becoming an affiliate of the Capital Region Chamber, held at the Hilton Garden Inn in downtown Clifton Park on June 17, 2021.    CSSC Chairman Chris Dowd, President/CEO of the Ballston Spa National Bank, heralded the combined regional organization as an opportunity to continue “local advocacy, local programming while providing expanded benefits, programs and resources, benefits” and “larger scale advocacy” for businesses in southern Saratoga County.  He commented that “the team put themselves in a perfect position to be able to offer support” to area businesses, that “was critical when you think about the challenges we’ve all endured over the prior several months.”

The awards night was hosted by WNYT NewsChannel 13’s Subrina Dhammi, utilizing a new (to southern Saratoga) Question-and-Answer format borrowed from the Chamber of Schenectady County’s annual awards events. The change was very well received, as the skilled host asked questions aimed at getting to understand the businesses involved and how they achieved the recognition that was being spotlighted that evening.

The “headliner” for the evening had to be area businessman and philanthropist Scott Earl, who was recognized as a Business Leader.  His presence on stage and witty answers had the attendees in stitches.   Plus, Earl shared some very poignant stories about how as a youngster in Watervliet he helped his mother, a single mom working three jobs, bake pie crusts to serve her customers and feed the struggling family.  He was the oldest of three boys, and commented that it made an impression on him how community members and especially the churches would assist his family.   That led to his willingness to humbly but generously donate to many important area causes.  It also drove him to strive for business excellence.  “We have a great team,” says Earl, “and the want and need to please people is embedded deep in our culture.”  He beamed proudly as he pointed out that Twin Bridges Recycling (1626 Route 9, Halfmoon, twinbridgeswasteandrecycling.com), one of his leading companies, has 5 out of 5 stars on Facebook.  “We’ll be there on time every time!” 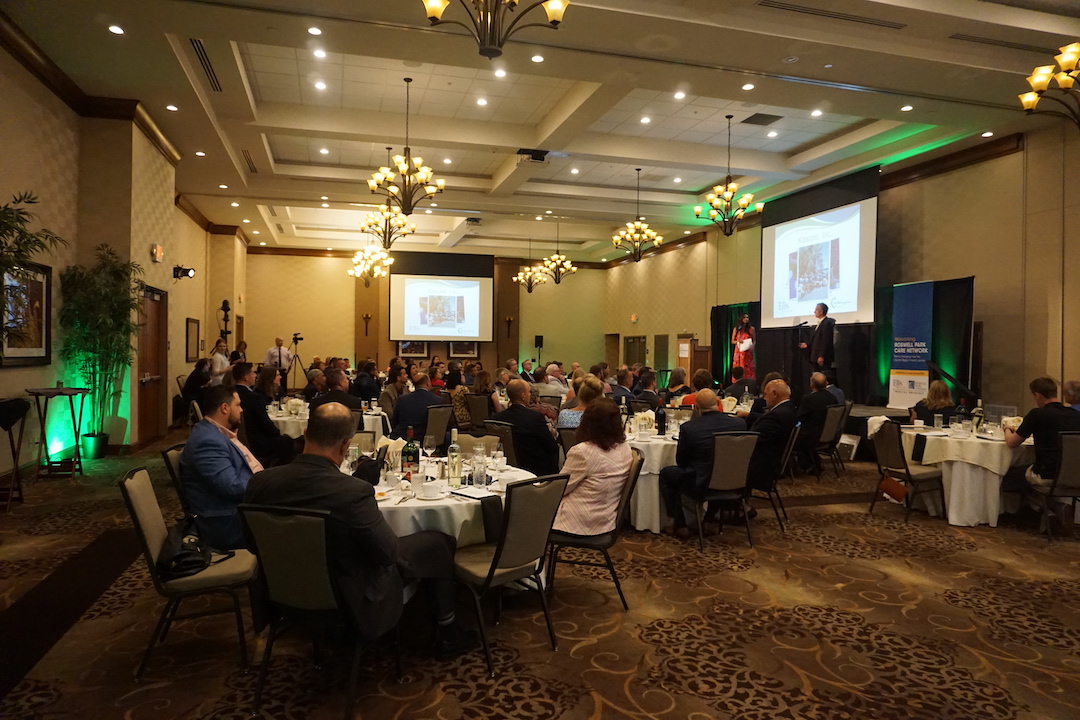 Pam Prachadith-Demler, co-owner of Rising Star/Outstanding New Business award winner Bound by Fate Brewing Company (31 Ferry St, Schuylerville, boundbyfatebrewing.com), told how her company brings people together, and what it means to a tight knit community such as Schuylerville to have a gathering place such as Bound by Fate.   Theirs is also the first-ever brewery to locate in this historic village, and they opened in early 2020 right before the onset of the Pandemic.  She commented about how our country and community has been so divided, and expressed hope that “we find a little bit more common ground and a place to share our stories over a great pint of local craft beer.”

Business Innovation was the topic as G&G Industrial Lighting (10 Corporate Drive, Halfmoon, ggled.net) received its award.  Cory Baright, Partner and VP of Finance accepted the recognition while looking ahead to a future of exciting growth opportunities and potential expansion in the Capital Region.  The company has found ways to bring LED lighting to car washes, food processing, transit and unique industrial applications, plus the SpaceX Kennedy Center launch!  “If you go through a car wash and see any color lighting….its probably ours, said Baright.   “This is a family business, my brother and I started the company, and we grew up in the car wash industry….in Dutchess and Ulster Counties.”  He later explained, while talking about the SpaceX launch that “we have a partner network throughout the country, one in every state, and are really fortunate that they have been able to come across some exciting opportunities.”  G&G is definitely a business to watch in the years ahead!

The Entrepreneurial Spirit Award went to Neet’s Autobody Repair, Inc. in Round Lake, which rebuilt after a fire caused a total loss in 2019, just in time for the Pandemic.  President Tim Neet discussed the challenges faced in the rebuilding from the fire and the year-long shutdown, commenting that “the most rewarding thing was to see that our customers came back to us.  We actually have grown not only in size but revenue and customers and are competing with corporate body shops in the area.”  A melted piece of a truck that was all that was left of it after the fire remains on the wall, as a reminder of the rebirth that took place at Neet’s.

Quick Response Restoration, Inc. (2077 Route 9, Round Lake, qrrestore.com) took home the Community Partner Award, in recognition of its work in partnership with other entities to further the development of southern Saratoga County.  They are one of the largest in their field on the entire East Coast, helping with fire, water and smoke, mold, trauma and COVID-19 disinfecting services.  They also put on a spectacular holiday lights display each year viewed by more than 10,000 people each night.  Director of Business Development Fabian Johnston accepted the award, expressing pride in “the generosity of our owner.  He is a philanthropist, he is a guy that whatever he gets he wants to give back.  He would work just to keep the lights on if that’s what it meant…..There’s not a lot of companies out there that have had the success that we’ve been able to have and bring that back to the community.”   Quick Response also performed free sanitization for First Responders during the Pandemic.

The Corporation of the Year, a recognition of a business that distinguished itself through achievements in growth and management and has been in business at least five years, went to Kitware, Inc. (1712 Route 9 Ste 300, Clifton Park, kitware.com)  President and CEO Lisa Avila proudly exclaims that “innovation not software is our primary product.”  Kitware doesn’t profit off its software to the extent many others do, because their software is open source.   However they have a huge impact on the world because their software is distributed all thanks to that same open source model, and their ability to innovate and be the “go to” resource to address tough problems is what brings in the customers.  Chairman Bill Hoffman agreed: “we started this and there were five of us….and have slowly built up a history and a reputation” which gives them an outsized impact on the industry.  The company is also 100 percent employee-owned, and this model gives the founders a chance to perpetuate the company in a way that is consistent with their values, culture and system long after the original founders retire.  “When we created this company one of our main goals was to create a place where we’d be happy working at for the rest of our careers,” says Avila, “and this gives us a chance to make sure that Kitware will continue to be a place that our employees can be happy working at for the rest of their careers, that the culture will continue on into the future.”

AYCO (ayco.com) was recognized for its 50 years in business in the Capital Region, with an award and recognition by Ms. Dhammi.  The event was sponsored by many area businesses, led by Presenting Sponsor Ellis Medicine, whose President/CEO Paul Milton spoke on the resilience the community has seen in the face of the unprecedented COVID-19 pandemic.  Other sponsors included Supporting Sponsors Bouchey & Clarke Benefits/Bouchey Financial Group, Inc., Capital Bank, ExeControl Global Solutions, Wine Sponsor the Ballston Spa National Bank, Contributing Sponsor GLOBALFOUNDRIES, and A/V partner Technical Video, Inc.

Perhaps the final word on the night was Scott Earl’s admonition to new entrepreneurs to try to focus on the big picture, and remember that “whether you win or whether you lose is determined by the day you stop.  Don’t stop.”