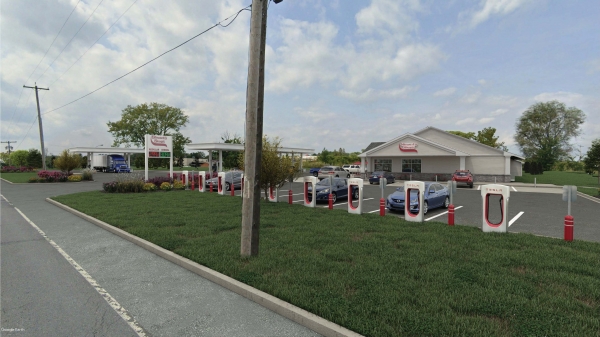 On July 1, Stewart’s Shops broke ground in Schodack, the first of five shops that will have NYPA (New York Power Authority) EVolve Electric Vehicle Fast Charging Stations by the of the year. Schodack will be operational in September, and construction is expected to begin any week now on the next site. The other four locations consist of Moreau, Latham, Keene, and Clifton Park.

As Chad Kiesow, Stewart’s Vice President of Facilities, said, Stewart’s Shops prides themselves on their quick transactions. Therefore, these five fast-charging stations will offer a total of 20 chargers, and the average time for a recharge is 15-20 minutes – plenty of time to grab a slice of pizza or a cup of coffee.

EVolve NY chargers can charge all non-Tesla electric vehicles, although some with come equipped with Tesla adapters. Some Stewart’s Shops currently have Tesla supercharging stations, but the company plans to install more by the end of this year as well.

“It is mainly for range anxiety,” said Bill Dake, Stewart’s Board Chairman. “If your electric vehicle has a range of 300 miles, it could lose 20% due to heavy AC or heater use. And realistically that is only 100 miles each way.”

The new chargers are part of NYPA’s EVolve NY charging infrastructure network that consists of key travel corridors. EVolve NY plans to install up to 150 chargers across New York State by the end of 2021, and after this buildout phase is completed, motorists will be able to drive any electric vehicle from New York City to Montauk, from Albany to Montreal, and from Binghamton to Buffalo with a charging station located every 50 miles or less.

Dake bought his first Tesla four years ago, and he understands what it is like to be far from home or heading into the Adirondacks with an electric vehicle.

“We are doing it where it makes sense, not every location,” said Dake. “As I am traveling around NY, I can now pop into one of our shops and recharge.”

The charging stations are also intended to encourage the adoption of electric vehicles, and Stewart’s Shops participation is not the only step the company has taken towards sustainability. Certain offsite locations and the manufacturing plant uses solar energy from solar panels. Reusable plastic totes are used for deliveries, and any cardboard used is brought back to a warehouse to be recycled.

“The convince store business is our niche,” said Kiesow. “Our partnership with EVolve NY will help us take a step into the future.”