Past Performance is No Guarantee of Future Results Featured 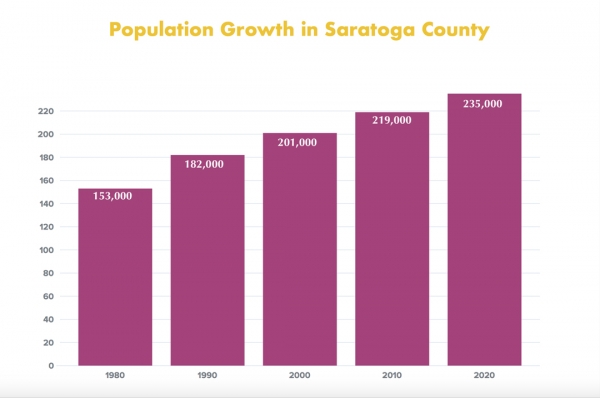 According to the US Census, Saratoga County’s population increased by 7.2 percent from 2010 to 2020.

This rise in our county’s population continues a five-decade-long trend. During these fifty years, the county’s population has increased 53 percent. This compares favorably with surrounding counties, like Albany County which saw a 10 percent increase during this same time, or Rensselaer at six percent, or Schenectady at five percent.

When something increased 53 percent, it sounds like a lot. But over fifty years, it averages out to just about 1 percent growth per year. In raw numbers, the growth means about 1,600 more people a year are added to our population.

During the last 10 years, the Towns of Ballston, Halfmoon, and Malta experienced the highest percentages of growth. In prior decades, it was Wilton, Milton, Moreau and Clifton Park that often led the way. In many respects, it is the Northway corridor where our growth has been concentrated because of the infrastructure — roads, water, and sewer — that is available in those areas.

In the City of Saratoga Springs, our population is now 28,586, up just a little more than 7 percent from ten years ago. The City added about 190 people per year during the last decade. This means we’ve experienced a .70 percent annual growth rate.

We need this type of reasonable growth to continue if we want to sustain our economic success and quality of life. We also must simultaneously plan for our future growth. Our planning must include efforts to preserve our local farms, open spaces, and historical properties. We need to continue the many local and county efforts to integrate and expand our trail systems. We need more workforce housing so more people can live near where they work. We need expanded public transportation as well.

Our five decades of growth is no accident. But it is unique. Two-thirds of all counties in New York State saw a decrease in their population in the last ten years. We are fortunate to have tremendous amenities that make living here attractive. The list of these attractions includes but is NOT limited to: SPAC and our arts and cultural attractions; the Track, Casino, and Fasig Tipton; the Great Sacandaga, Saratoga Lake, the Hudson River, and our canal system; three beautiful state parks and the Saratoga National Historical Park; as well as an abundance of locally-owned small businesses in every City, Town and Village across the county.

Our k-12 schools are among the top performing in the state. They are constantly innovating. In many cases, the people moving here went to school here themselves years before. As they start to have families, they come back knowing this is a great place to raise their children too. At the Chamber, we call these people “rebounders.” They come back with trailing spouses making them highly sought after by local employers growing their local operations.

The Chamber is working to grow our population because we need more people to fill the local jobs we now have. Our Healthy Saratoga campaign is part of our talent recruitment effort. More so now than perhaps ever before, we expect people will want to live in healthy communities going forward. The work of our Veterans Business Council helps to promote Saratoga County as a great place for Veterans and their families to live and work. Our work to promote Saratoga County as a great place to visit has also helped us convince people to live here.

Thinking of the success and growth we’ve seen in the last fifty years, I am reminded of the quote often used in the investment community. “Past performance is no guarantee of future results.” We cannot be complacent. Where we can do better, we should. That’s what those leaders before us did over the last fifty years. Let’s make them proud by continuing this tradition for the next fifty years.