From Sal the Mule to Big Tug, Our Canal System is a Commercial Thoroughfare Featured 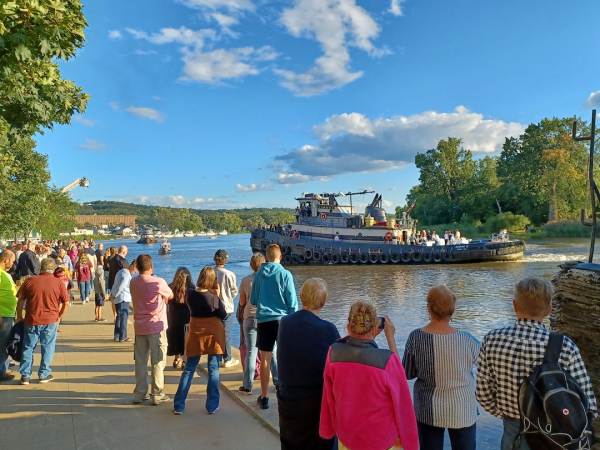 The New York State Canal System is nearing 200 years old, and the current locks and systems date back to the early 1900s.  As the bicentennial in 2025 approaches, New York State has commissioned the “Reimagine the Canals” initiative to look at ways to revitalize the waterways, the communities that border them, and catalyze excitement among residents and transients alike, introducing a whole new generation to the wonders of the 524-mile Canal System.

Recreational uses of the canals are very abundant, but as New York State’s economy emerges into the post-Pandemic world, we would do well to remember that the canals were designed to be first and foremost a commercial Thorofare.  Sal the Mule was, in most cases, pulling a barge full of cargo, and while faster modes of transportation (rail, Thruway, pipelines) have in most cases obviated the need for the slower, water-borne routes, there is still a need for barge transportation for bulk and specialized cargoes.   Plus, we are entering a world where every delivery method and vehicle’s carbon footprint is being scrutinized, and marine transport offers the lowest carbon footprint of all!   Plus, revolutionary new marine propulsion systems such as the solar-electric power of the Solar Sal family of boats is a harbinger of what may become available in the future.   We may indeed be on the verge of being able to carry 100 and even 200-ton cargoes on the canal system in a boat with a ZERO carbon footprint!

To be sure, even 200 tons pales in comparison with the 1500 tons or more that a typical canal-capable barge and tugboat can carry today (the Locks of the “modern” 1918 barge canal were designed for 3000-ton capacity craft).  But at least its possible to carry something fairly large sized on the water using a zero-carbon footprint.  And if one is concerned about the equation making the rounds in academic circles where longer transportation times equals larger carbon footprint, here is one method that defies that equation and can do it reliably and safely!

But for now, we have the conventional tugs and barges which were on display at the 2021 “almost annual” Waterford Tugboat Roundup for the first time since 2019.   Unfortunately, the annual Roundup was postponed last year due to the COVID-19 crisis and in 2011 due to the flooding Hurricanes Irene and Lee.  But this year, the event went splendidly.  There were recreational and commercial tugs and working vessels of all sizes, from the tiny “Toot Toot” all the way to the giant, oceangoing “Sarah D” of the New York State Marine Highway Transportation Co.  Vendors, food and music were plentiful, tour boats plied the waters of the Hudson and gave visitors a look at the 100 year old “Day Peckinpaugh” moored upstream from Lock E-2 on the Erie Canal.   Friday night’s fireworks were among the best in upstate New York.  There clearly was a lot to like about the Tugboat Roundup!

Above all, the Roundup is a reminder that these boats actually do work on New York State’s waterways.  To be sure, most of the commercial transit is south of Albany these days, but the mechanism exists to dramatically increase barge operation on the Canal System, should New York businesses and elected officials want it.  Saratoga County borders both the Erie and Champlain Canals; therefore every single vessel which transits the length of the Canal System must pass through our waters.  There is the potential to add commercial marine facilities, such as the Area 3 intermodal complex along the Hudson River in Halfmoon that has been on the table for several years. It would seem that now is a good time to look again at this time honored method of transit, and consider its application as the clean, green, mid-21st Century dawns.

Photo Captions for Images in Gallery:

Photo 2 - “Low bridge, everybody down” is still a thing on the Erie Canal, and tugs like the “Frances”, shown here, have it handled easily.  The entire pilothouse of this vessel and her sister, “Margot” can telescope up and down in order to neatly tuck under those low bridges, all while her 1440hp diesel keeps cruising along.

Photo 3 - Fireworks light up the sky over the Tugboat Roundup.   These are among the best in upstate New York, and a perennial favorite.  The festivities at the Waterford waterfront, hosted by the Town of Waterford and its many sponsors, bring residents and transients alike to visit the vessels tied up at the Harbor Center, and partake in the history, tradition and the ongoing saga of the working vessels on our waterways.

Photo 4 - A fan favorite every year are the small tugboat-like vessels designed for pleasure use, patterned after their larger brethren, and always a lot of fun to see on the water!

Photo 5 - Its not just tugs at the Roundup, as occasionally other interesting and storied vessels, such as this wooden pleasure cruiser of half a century ago, join the other boats at the Harbor Center.

Photo 6 - Can tugboats share the waterways with pleasure boats and even kayaks?  There is plenty of reason to believe so, and the canals would be well served to be heavily traveled by both.  Here, a fleet of kayaks exits the Waterford Flight (5 locks in succession) and passes the tugboats along the docks.

Photo 7 - The communities along the canals participated in the Industrial Revolution and helped usher in many modern devices into our society.  An example would be this Button fire engine, manufactured in Waterford well over a century ago and currently owned by the Stillwater Fire Department.

Photo 8 - The Tugboat Roundup was recognized with a 2021 Byway Community Award, presented by the National Scenic Byway Foundation by Eric Hamilton, Executive Director of the Mohawk Towpath Scenic Byway.   Waterford Town Councilwoman Laurie Marble and Councilman Jim Boudreau accepted the award at the closing ceremonies of the Roundup.

View the embedded image gallery online at:
https://saratogabusinessreport.com/component/k2/item/305-from-sal-the-mule-to-big-tug-our-canal-system-is-a-commercial-thoroughfare#sigProId63342ca193
More in this category: « Forensic Marketing Technology Captures Evidence in Albany Jewelry Store Heist: Becomes First Case in Northeastern US to Utilize SelectaDNA The Future of Events in Saratoga »
back to top