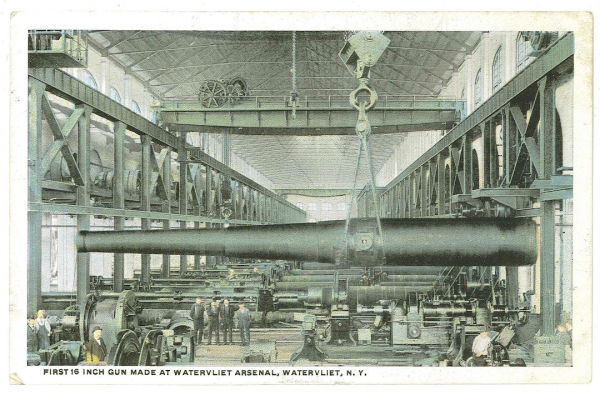 Massive cannons like these were once commonly manufactured by the Watervliet Arsenal, since the War of 1812. Though their mission has changed, they are no less a vital part of the fabric of both our military and the region which surrounds the plant. (US Army photo)

Veterans Day is celebrated on the 11th day of the 11th month every year, in commemoration of the end of the so-called “War to End All Wars” (World War I) that ironically led to an even bigger conflict 20 years later (World War II).  Ever since, our armed forces have remained diligent in serving and protecting our nation and its citizens.  While the focus of Veteran’s Day is often on those who have served, it’s important that we also recognize those who are presently serving our country. Our Chamber recognizes and supports our area military installations throughout the year through our Unified Military Affairs Council (UMAC).

The late Chuck Steiner, Capital Region and former Chamber of Schenectady County President, formed a Military Affairs Council here, patterned after that in his former community in western NY.  Chuck saw first-hand the value of an organized initiative to help support and advocate for Military installations throughout our community.

During the pandemic we continued to witness the impact these installations have on the Capital Region. It is clear that they are assets to the regional economy, as they are to national defense.  Due to their importance to national security, these installations, that employ thousands, kept operating, while non-essential operations throughout our community were forced to close during last year’s lockdown.

The Stratton Air National Guard Base and Watervliet Arsenal served as vaccination sites for Department of Defense workers.  Last December, the Arsenal became one of DoD’s first vaccination sites for military personnel and defense contractors.   That is significant because defense is a major industry in this region.  In the 2021 Federal fiscal year, there were about 300 firms in the Capital Region with defense contracts.

Today, at a press conference in Schenectady, Lynn Manning, Chair of UMAC, plus several military commanders and civic leaders spoke of the significance of these bases and their impact on the Capital Region.  They also expressed thanks to Marshall & Sterling and Price Chopper/Market 32 for their generous support as UMAC champions.

Here is an overview of the various local units:

Naval Support Activity Saratoga Springs is a fully operational, active operation under a Commanding Officer and under the command regional area coordination of the Commander Navy Region Mid Atlantic.

Located in Saratoga Springs, its primary mission is to provide operation support to the Naval Propulsion Training Unit (NPTU) Ballston Spa, (one of only two in the U.S.) and to perform host command functions.  Secondary missions include providing Personal Property, Housing, Fleet and Family Support, Administrative, Morale, Welfare, and Recreation services to active duty naval personnel and their dependents in the New York State Capital Area, Massachusetts, and Vermont.

The Navy Reserve Center (NRS) Schenectady provides training and administrative support to eight Navy Reserve Units. This is accomplished by “providing advice, assistance, and support to assigned Selected Reserve units and other participating Reservists in order to ensure effective training and administration of such units and personnel.” The NRS Schenectady installation provides an opportunity to drill Navy reservists close to home and is equipped with training classrooms.

The mission of Nuclear Power Training Unit (NPTU) Ballston Spa is to train and qualify Sailors to operate the nuclear power plants onboard our Navy’s aircraft carriers and submarines so they may deter our enemies and win our Nation’s wars. That is our business and the role we play in our fighting profession. Our aircraft carriers and submarines cannot fight nor do their mission without the Sailors we train. We perform this mission in concert with the professionals of the Knolls Atomic Power Laboratory (KAPL) and the Naval Reactors Representatives Office (NRRO).The training and certification takes approximately six months of practical instruction under the close supervision of qualified staff. Currently NPTU Ballston Spa trains and certifies approximately half of the personnel (officer and enlisted) needed to operate the U.S. Navy's reactor plants on nuclear-powered warships (i.e., all commissioned submarines and aircraft carriers). The other half are trained at a similar facility in Charleston, South Carolina.

Stratton Air National Guard Base is home to the 109th Airlift Wing, part of the New York Air National Guard. The unit flies the world's only ski-equipped LC-130s or "skibirds," as well as traditional C-130 "wheelbirds." The 109th has the responsibility of flying missions for the National Science Foundation-led United States Antarctic Program. During the spring and summer, the unit flies training missions out of Kangerlussuaq airport in Greenland and from there flies to the Arctic Ice Cap transporting materials and scientific researchers to remote locations where they conduct research. During the fall and winter, the Wing flies similar missions out of McMurdo Station, Antarctica.

U.S. Army – Albany Recruiting Company, with headquarters located on the Watervliet Arsenal, New York, encompasses 38,760 stateside square miles. It is responsible for the Army’s recruiting mission in Europe, northern Africa, and the Middle East. The Albany Battalion’s mission is to provide active Army and Army Reserve enlistees for our nation’s defense.

Watervliet Arsenal is an Army-owned and operated manufacturing facility located in Watervliet, New York. The arsenal is the oldest, continuously active arsenal in the United States having begun operations during the War of 1812.

Today's arsenal is relied upon by U.S. and foreign militaries to produce the most advanced, high-tech, high-powered weaponry for tank, howitzer and mortar systems. Since our humble beginning July 14, 1813, our products have helped hundreds of thousands of servicemen and women fight and win our nation's battles and come home safely. Watervliet Arsenal is also home to the U.S. Army's Combat Capabilities and Development Command Benet Laboratories, which is the Army's premier research and design facility for large caliber weapon.

The $1.6 billion arsenal manufacturing complex is situated on a 143-acre site and spans 72 buildings with 2.1 million square feet of manufacturing and administrative space. This National Historic Registered Landmark has an annual economic benefit to the local community in excess of $100 million.

From the War of 1812 to today's modern conflicts, Watervliet Arsenal stands ready to support our nation's warfighters. We are building on excellence and forging the future.

Photo Captions for Below Gallery:

PHOTO 1: A closeup of an LC-130 “skibird”, taken a few years ago at the Stratton air base.  Often seen flying overhead in our region, these planes make long distance flights to Antarctica and Greenland seem routine.

PHOTO 2: The late Chuck Steiner, “father” of UMAC, is pictured speaking to a full house at Glen Sanders Mansion in 2015.  Chuck recognized the importance of military installations not only to our safety and security but also to the regional economy, and built a community organization to support their activities.

PHOTO 4: Massive cannons like these were once commonly manufactured by the Watervliet Arsenal, since the War of 1812.  Though their mission has changed, they are no less a vital part of the fabric of both our military and the region which surrounds the plant.  (US Army photo)