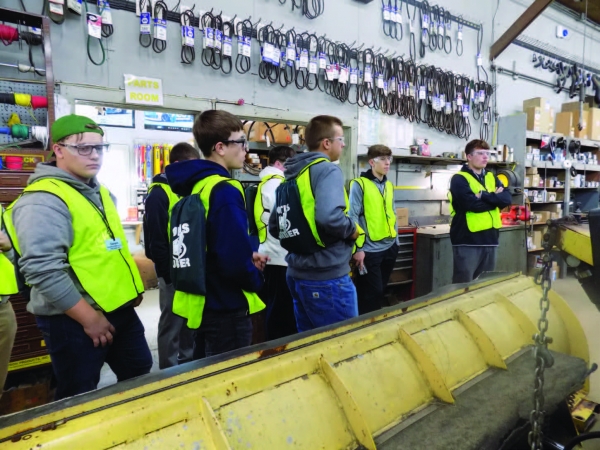 Saratoga Springs - I could build more homes if I could find the labor. Do you know anybody looking for work?

Why aren’t young people getting into the trades? Accord­ing to the Department of Labor, the U.S. economy had 7.6 million unfilled jobs in the trades and only 6.5 million people looking for work as of January, and the problem has only gotten worse.

Discussions at every Saratoga Builders Association (SBA) Board meeting for months centered around these concerns. We need more young people to support the demands on the construction industry. We continued this fruitless exercise until finally someone suggested we stop the meaningless dialogue unless we intended to do something about it. There was a long pause, and then a productive exchange ensued as board members started sharing ideas. You could feel the mood change and the excitement build.

As a start, we formed the SBA Task Force consisting of builders, suppliers, and other interested association members. Dialog on how to proceed led us in many different directions. Where could we have the greatest impact with the end goal of bringing more labor to an already tired and aging workforce? The topic is complex, and there’s no easy answer.

We quickly realized we needed help from others outside our small group, so we reached out to Washington-Saratoga-Warren- Hamilton-Essex (WSWHE) BOCES and invited them to join our Task Force. Their participation quickly confirmed our suspicions. There is a huge lack of awareness about career opportunities in the construction trades. This is combined with misconceptions surrounding the work (e.g., too physical, poor pay, long workdays) and the list goes on.

We had now uncovered our mission: “To encourage young people and adults to consider a career in the construction industry by bringing an awareness to the benefits associated with it.” Our team was ready and eager to help the industry find young talent—but how do we reach the students? High schools seemed to be a logical, obvious avenue. We knew BOCES understood the industry challenges, but we didn’t know what to expect from the schools. We set up meetings with several local school superintendents, principals, and guidance counselors. We shared our mission and what brought us there.

We had predetermined notions going into these meetings that schools were partially to blame for our labor problems by pushing four-year college degrees to help their “ratings.” Only students who were academically challenged were introduced to the trades (maybe). Our thinking was not entirely wrong, but we were encouraged to find that superintendents and principals were very aware of the problem and more than willing to support our efforts and work with us. We did however feel resistance from many guidance counselors. They were willing to listen, but we realized there was more work to be done with this audience. It also became clear that parents contributed to the awareness problem and shared in the knowledge gap.

Parents want their children to have a successful career. They don’t want their children to work in a career that requires hard physical labor, long hours, and low pay; a college degree will divert them from such a path. Here again, the lack of awareness and misconceptions of the trades has been guiding parents to steer their children away from careers that can be very rewarding. Speaking with school staff, we heard repeatedly how they struggled to connect with parents and forewarned us it would be difficult to find ways to engage them. We have found this to be true and it remains one of our biggest challenges.

Pre COVID-19, we created activities to engage our mission using valuable feedback from our meetings with school staff. The next few paragraphs highlight some of the activities our Task Force has done to try to make a difference; piloting our programs using two local schools. In the first activity, we partnered with highly respected local builders with different styles and approaches to their trade. They presented to junior and senior high school students about the day-to-day in building and construction. Most students were hand-selected by school staff to participate and academic achievement was not a consideration. We feel strongly that students at any academic level can benefit from this awareness. The presentations were interactive and intentionally informal. Students had an opportunity to engage and experiment with tools and technology used in construction. Surveys conducted at the conclusion of each session showed an increased awareness about the trades and for some, a willingness to want to learn even more and possibly consider the trades as a career option.

We also held a career day at Curtis Lumber with students from the same two pilot schools, with some faculty members choosing to participate as well. Prior to attending, students were asked to select either a sales or operations career path. They were guided through a series of learning sessions based on their chosen path. Those who chose sales spent time with the kitchen and bath design team, the estimating department, and project center. The operations group worked with dispatch and logistics, the mechanics shop, and manufacturing door shop. At the conclusion of the tours, the two groups came together for lunch and a presentation by the marketing department. All presentations for both career groups were purposely designed and presented by Curtis’ younger team members and focused on the technology aspects of the work for broader student appeal.

As our third activity, we scheduled half-day tours at multiple homes under various stages of construction. The goal was to provide students with an opportunity to experience a working jobsite and see the various trades in action real time. Builders would travel with students between site visits to allow for additional questions and discussion. Unfortunately, the outbreak of COVID-19 prevented this from happening so we’re hoping to be able to offer it in 2021.

Another popular event was the construction of a tiny house in conjunction with WSWHE BOCES. The CTE students along with volunteers from the trades and local community members built the house on the school campus. It was featured during the SBA Annual Showcase of Homes. Many who worked on the house were on-site during the Showcase tours to share their experiences and promote awareness of the trades. The event culminated with an awards dinner where the students spoke about the project to an audience of 300.

After a brief COVID-19 pause, the Task Force re-engaged our mission, albeit with changes. The pandemic forced us to rethink how we would continue to bring awareness to the trades under a very different set of conditions. We continued to consult with our two pilot schools to help alter our strategy. Additionally, an instructor from Hudson Valley Community College heard about us and reached out. He has been working on his own endeavor, Expertise Project, under the premise that we can’t fix the skills gap until we address the awareness gap. He utilizes students’ love of technology and puts cameras in their hands. They visit local jobsites and manufacturing facilities and film whatever interests them on the tours. This raw footage is edited by others for OSHA compliance and converted into short videos from the students’ perspective. Our Task Force has partnered on this project and is helping fund a pilot of the program in early 2021 with 150+ videos. The end goal is to produce a “Netflix of local jobs” video library with thousands of videos that schools can access and use to promote awareness of numerous trades here in our local communities.

It’s been more than two years since we launched the SBA Task Force. We’ve met some amazing people dedicated to working with students, partnered with great organizations, and made many lasting relationships. Our small group has grown significantly in number and now expands well beyond SBA members to include a high school superintendent, BOCES assistant superintendent, and a community college instructor. Their involvement brings an authentic perspective from academia to help us reach the students as we work to dispel misconceptions and educate about the facts.

As an industry, we need to acknowledge that we too are at fault for the gap in our labor force. Arguably, perhaps even the most to blame. What have we done collectively to attract young people to the trades and educate the school systems and parents on the merits and benefits of a career in the construction industry? There is so much more to the construction industry today than hammers and nails.

Without the trades, we as lumber and building material suppliers will struggle to be successful. This is not just a local problem. The trades are struggling nationally. A recent statistic reports 62% of firms nationally are struggling to fill important skilled trades positions. It’s difficult to validate this number; however, it is safe to say the percentage is significant. The good news is, we can all do something to change the course we’re on. As we realized in that board meeting many months ago, talking about the problem without acting solves nothing.

A good place to start is with your local school districts and BOCES. The schools are eager to partner with local businesses and organizations. They are passionate about helping their students. They welcome learning about career opportunities for students to open doors for meaningful conversations with counselors and CTE instructors. Your business might consider offering job shadowing or OJT for students. These experiences provide meaningful education beyond the classroom.

Ultimately, we all can do something to further the cause. There are many talented young people in our school systems who would benefit from an exciting, lucrative, rewarding career in the trades. In no way does the Task Force discourage young people from at­tending a four-year college. We simply recognize that it may not be the path for every student. We all want what’s best for our chil­dren and as such, we have a responsibility to provide them with an awareness of the benefits and career opportunities in the trades.