“Nothing is Better than Home Made!” Featured 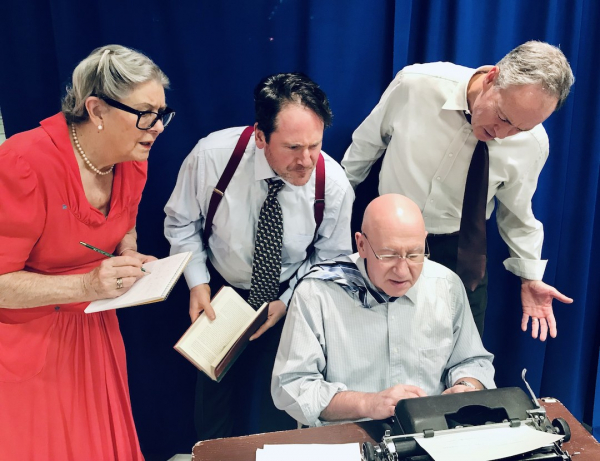 SARATOGA SPRINGS – Saratoga’s Home Made Theater is putting the final touches on their December production.

Home Made Theater has come a long way from their 55-seat theater at Café Lena in 1985 to being the resident company at Spa Little Theater in Spa State Park for 35 years, where they produced over 175 shows and musicals. Now they are starting a new chapter at the Wilton Mall and Saratoga Arts as they get ready for their December and February productions.

The non-for-profit theater is now renting out a storefront at the Wilton Mall to serve as a multi-purpose space for rehearsals, a seam shop, and storage. Their 2021-22 five-show season opened at Saratoga Arts in October with Almost, Maine. They made a proactive decision to move out of their home at the 80-year-old Spa Little Theater, as it is in need of some repairs. Their show season will continue at Saratoga Arts in December with Moonlight and Magnolias and They’re Playing Our Song in February.

“We are thrilled to be a part of such a thriving artistic community,” said Eric Rudy, Home Made Theater, General Manager. “Our theater was created for the community.”

Moonlight and Magnolias, directed by Theresa Storti and featuring a four-member cast of actors Joe Frederick, John Love, Michael J. Madsen, and Dianne O’Neill, is a comedy about the film adaption of Gone With the Wind and is based on historical events during the Civil War era.

Also upcoming for Home Made Theater is auditions for their February musical production of They’re Playing Our Song. They’re Playing Our Song is a funny, romantic show about an established composer and his relationship with an aspiring young female lyricist. Auditions will be held on Sunday, Dec. 5 and Monday, Dec. 6 from 7 to 9 p.m. by appointment only at the Theater’s rehearsal space in the Wilton Mall. There are 8 roles available to men and women mid-twenties and up; actors of any ethnicity or gender identification are encouraged to attend. For more detailed information and to make an audition appointment visit Home Made Theater’s website at www.HomeMadeTheater.org.

You can also visit Home Made Theater’s website or call 518-587-4427 during regular business hours for season ticket and subscription information. Come out to see a show and experience why “nothing is better than Home Made!”.