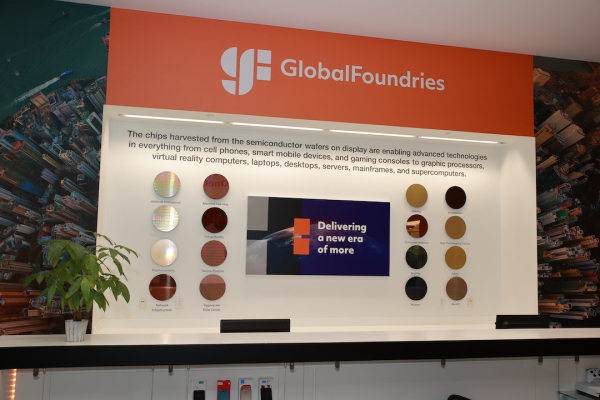 Semiconductor “wafers” such as these produce the chips needed to control a vast array of devices available in today’s marketplace. Photo courtesy of GlobalFoundries.

The last couple of years have been challenging for industry, not only in America but worldwide.  Challenges in meeting demand for products, bottlenecks in the supply chains which bring raw materials and finished goods to our shores and distribution centers, and the countermeasures taken to address the ongoing Pandemic have caused significant delays in getting items both large and small to market.   Some of the most acute shortages have been faced by the automobile industry, where the lack of microchips has idled a large amount of inventory, unable to be delivered for lack of the “brains” to keep the vehicles running smoothly and efficiently.  Some manufacturers have reportedly resorted to delivering vehicles with some features disabled, simply to get them to customers and attempt to meet demand.

Clearly this is not a long-term solution, and there are some great manufacturers here in the United States that can impact this crisis.  One such company is located right here in Malta.  GlobalFoundries (GF) is one of the world’s leading semiconductor manufacturers, making innovative, feature-rich chips found in the electronics that are pervasive throughout people’s lives. GF manufactured silicon is in everything from cars to smart phones to consumer devices and datacenters. Recently, it was announced that GF is teaming up with Ford Motor Company to address the chip supply shortage and growing demand for chips in FoMoCo vehicles.   GlobalFoundries also announced a planned expansion earlier this year which should bring more capabilities to its sprawling complex in Luther Forest and good paying jobs to the Capital Region.

The collaboration between GF and Ford will also focus on joint research and development to address the growing demand for feature-rich chips to support the automotive industry. These could include semiconductor solutions for advanced driver-assistance systems (ADAS), battery management systems, and in-vehicle networking for an automated, connected, and electrified future.

Q: What is the significance of the MOU between GF and Ford Motor Company?

A: GF and Ford Motor Company announced a strategic collaboration to advance semiconductor manufacturing and technology development, within the United States, that will increase supply for Ford and the U.S. automotive industry. The two companies also announced that they will collaborate on the design and manufacturing of feature-rich semiconductor solutions for ADAS, battery management systems, and in-vehicle networking for an automated, connected, and electrified future.

Q: What will this do to alleviate the current chip shortage faced by Ford Motor Company that has impacted vehicle deliveries during the pandemic?

A: First and foremost, GF is building stronger relationships between the Foundry and the automotive industry to collaborate on engineering, strategic planning, and investments. And the announcement with Ford is a great example of that.  Also, our recently announced investments will enable GF to better serve the automotive industry. We will not only fill out the existing capacity we have and accelerate our efforts to provide supply immediately to automotive customers and address the global supply shortage, but we will also construct a new fab in Singapore that will provide additional manufacturing capacity to serve our automotive customer needs into the future. GF is committed to being the automotive foundry of choice and the investments we are making now are a key step forward to address the growing demand for chips in cars.

Q: Is there a long-term strategy to modernize computer systems used in cars/ trucks made by Ford Motor Company?

A: The collaboration reflects our commitment to work together to investigate an alliance on providing more wafer supply as well as developing solutions and technologies on feature-rich chips in the future. This could include research, development and manufacturing.

Q:  How does this development vindicate the decisions made in recent years regarding the focus and investments made here in Saratoga County and elsewhere?

A: The collaboration between GF and Ford is another proof point of how GF is building strong partnerships with the world’s leading companies to deliver the innovative features in the electronics that are pervasive and critical in people’s lives.

PHOTO 1: Semiconductor “wafers” such as these produce the chips needed to control a vast array of devices available in today’s marketplace.  Photo courtesy of GlobalFoundries.

PHOTO 2: A view inside of the massive “clean room” at GlobalFoundries Fab 8 in Malta.  Devices such as the ones produced there require an extremely clean, sterile environment in order to achieve the tight tolerances and tiny scales involved.  Photo courtesy of GlobalFoundries.

PHOTO 4: A closeup of a silicon based semiconductor wafer of the type produced at GlobalFoundries.  Each of these pieces will contain hundreds of chips once the machine work is finished and it is cut up.  Photo courtesy of GlobalFoundries.

PHOTO 5: Classic cars such as this 1967 Ford Galaxie 500 XL Convertible on loan from Koval Electric of Halfmoon to the Chamber of Southern Saratoga County used old fashioned analog control devices, with manual adjustments and crude emissions systems.   Today’s automobile is vastly more complex and expensive, yet far more sensitive to environmental concerns and capable of providing many comfort, information and safety features for the driver.

PHOTO 6: Today’s cars are far more advanced than vehicles of old, but many changes are just around the corner, including the planned switch to electric cars by most automakers in the coming decades.  Dealer lots such as that of Morris Ford in Burnt Hills (pictured here) have had far less inventory than usual due to the shortage of computer chips as well as other supply chain challenges, but the partnership between GlobalFoundries and Ford Motor Company promises a smoother riding production in the future.

View the embedded image gallery online at:
https://saratogabusinessreport.com/component/k2/item/408-globalfoundries-and-ford-motor-company-collaborate-to-meet-demand-for-vehicle-microchips#sigProId776736493b
More in this category: « The Economics of Horse Racing Recruiting Challenges Reach Record High Levels »
back to top