Merchandise Made for Taking a Stand 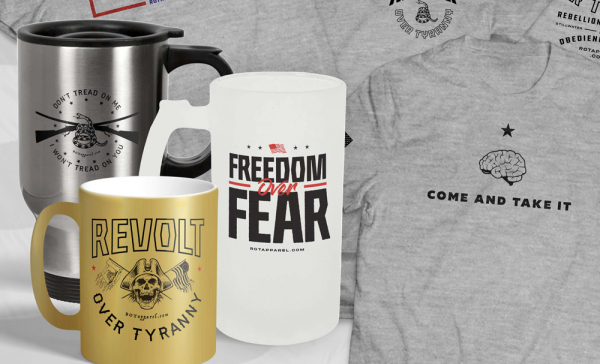 STILLWATER – A new company based out of Stillwater is selling merchandise to promote free thought and be a beacon for like-minded individuals.

Mallorey Schaller, founder of Revolt Over Tyranny Apparel Co., is a former Spanish teacher in a Saratoga County school district who was fired for not complying with the COVID testing mandate instituted by her school; Mallorey had tested positive for COVID prior. In response, she and her husband have created and now officially launched ROTapparel.com.

“I always tell my students to ‘think enough of yourself to think for yourself’, and I think I demonstrated that,” said Mallorey. “It’s heartbreaking that it resulted in me having to leave them, but I had to show integrity.”

ROT’s designs can be worn and displayed as they sell t-shirts, canvas totes, ceramic mugs, insulated stainless steel mugs, frosted glass beer steins, Christmas ornaments, and more. Mallorey’s husband is the graphic designer, but together the husband-and-wife team are constantly coming up with new designs. When the company first launched, they had only a couple of items in their inventory with sayings such as “Let’s Go Brandon”. They have quickly expanded in these past few weeks to start selling t-shirts and more designs, such as those based around the 2nd Amendment. ROT has also just introduced their new mascot, Revolutionary Rotty, through their made-to-order merchandise.

Mallorey and her husband design, print, and ship everything in-house out of Stillwater. For the holiday season, there are discounts sitewide. Their Black Friday sale will continue throughout the month of December; use code blackfriday1776 for an extra 20% off.

ROT merchandise is online only right now as they continue to get their footing. Mallorey explained that she has seen a lot of assumptions and comments about her situation, calling her an antivaxxer, which she is not. However, she is not letting the judgment they pass online get to her, and it is not affecting ROT’s sales either.

“I know what I did, and I stand by it,” said Mallorey. “I know there are people who disagree, and I think that’s okay. That is your freedom, you have the right to disagree and to vocalize your disagreement.”

On the other hand, Mallorey and her husband are hoping to bring together some like-minded individuals with their designs.

“I think that there are a lot of other people out there like me,” said Mallorey. “As I have been working on getting this website up and running, I’m finding that a lot of people feel the same way and are just scared of the repercussions that might happen if they spoke up.”

“I have had a lot of people reach out to me in support,” she added. “Our aim is to spread the message of freedom and show other people that they are not alone.”

For more details and to shop Revolt Over Tyranny’s merchandise, visit www.ROTapparel.com.

Read 347 times
Tweet
Published in New Business Spotlight
More in this category: « A Fresh Twist on a Breakfast Favorite Fierro’s Pizzeria Gets an Upgrade From New Owners »
back to top