Thank You, for giving your feedback for this Ad
Uninteresting
Irrelevant
Misleading
Offensive
Repetitive
OTHER
Friday, 04 February 2022 14:57 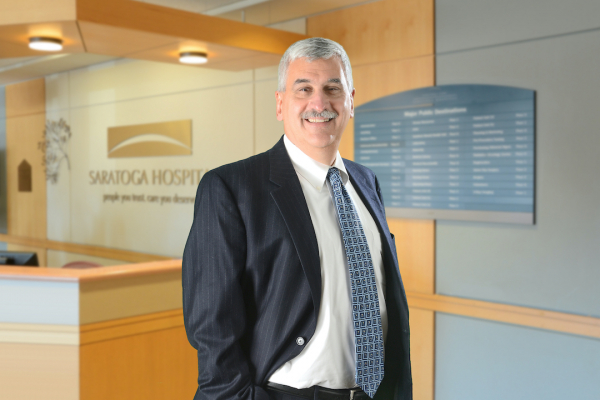 SARATOGA SPRINGS — Saratoga Hospital President and CEO Angelo G. Calbone will retire later this year, ending a 16-year tenure that transformed both the hospital and healthcare in the region.

Calbone’s decision was announced on Jan. 31 by Saratoga Hospital Board of Trustees Chairperson Michael J. Toohey, who lauded the impact of the CEO and his team.

“Every family in Saratoga County has access to better healthcare because of what Angelo and his team have built,” said Toohey. “They have expanded and improved services, invested in facilities, technology and talent, and elevated the quality of care and reputation of this hospital.”

Equally important, Toohey added, “They have laid the foundation for Saratoga County residents to continue to benefit from excellent healthcare for years to come.”

Calbone intends to step down by the end of the summer, fulfilling a long-standing promise to his family that he would retire at age 65. He informed the board of trustees late last week to provide ample time to name his successor, who will be recruited via a nationwide search that will include internal and external candidates.

Calbone took the helm at Saratoga Hospital in September 2006. Under his leadership, the hospital has expanded significantly, reflecting his vision of improving the region’s health, in part, by bringing services closer to those in the community. Saratoga hospital now provides care on three campuses – in Saratoga Springs, Malta, and Wilton – and at over 20 locations across the county. Its Saratoga Hospital Medical Group has more than 300 providers in over 30 specialties.

In addition, the hospital’s Saratoga Community Health Center make high-quality, affordable care available to those who are underserved or underinsured. As an affiliate of the Albany Med Health System, Saratoga Hospital connects patients to the higher-level care available locally only at the Capital Region’s sole academic medical center.

Saratoga Hospital also has gained national recognition and is typically among the first in the region to attain voluntary certifications and “centers of excellence” designations for various service lines. The hospital has been named a “Best Regional Hospital” by U.S. News & World Report and, last year, earned a place among Newsweek’s “World’s Best Hospitals 2021.” Saratoga Hospital was one of just six New York facilities – and the only New York community hospital – to make the Newsweek list.

For Calbone, it has been a labor of love, and above all, a team effort.

“It has been the honor of a lifetime to serve this community with this team,” he said. “Some of my most vivid memories will be of the courage and commitment they have displayed during the worst public health crisis in recent history.”

“When our community needed them most, our team stepped up – and continues to rise to the occasion,” Calbone added. “They are the driving force behind all our accomplishments. They are Saratoga Hospital.”

Before joining Saratoga Hospital, Calbone was President and CEO of Mount St. Mary’s Hospital and Health Center in Lewiston/Niagara Falls, NY, and CEO of the Health System of Niagara. He has a bachelor’s degree from West Liberty State College in West Virginia and a master’s in Health Services Administration from The George Washington University in Washington, D.C.