Thank You, for giving your feedback for this Ad
Uninteresting
Irrelevant
Misleading
Offensive
Repetitive
OTHER
Friday, 11 February 2022 14:35 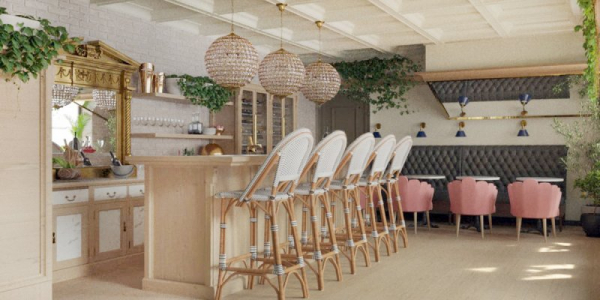 A rendering of the bar on Phila Street, which is currently under construction. Image provided.

SARATOGA SPRINGS – A taste of French culture is coming to downtown Saratoga Springs. Bocage, an innovative champagne bar, will open at 10 Phila Street.

Inspired by their travels in the countryside of northern France, Clark Gale and Zachary Denham are turning the 500 sq. ft. space on Phila Street into an intimate bar atmosphere that will serve champagnes, sparkling wines, still wines, limited spirits, and light fare to pair with them, such as charcuterie boards, oysters, and caviar. The bar will be able to seat about 20 people with additional standing room and is being designed with help from Marko Tarasenko.

Gale and Denham are able to make Bocage accessible to all, regardless of price point or knowledge, through the Coravin wine preserver which allows sparkling bottles to be preserved by-the-glass; meaning patrons do not have to purchase an entire bottle.

Both Gale and Denham are professionals in the hospitality industry, but Bocage is the first establishment where they will get to be completely in charge. Denham has experience opening fine dining restaurants, including for three-Michelin Star Chef Dani Garcia, and Gale ran operations for Barcade, a chain of arcade bars.

“Bocage” is a French word used to reference the pasturelands of France’s northern countryside, which is geographically similar to northern New York, and has similar growing conditions to make for similar wines.

Gale and Denham signed the lease for the space in October 2021. An opening date will be determined based on the approval of their liquor license.