Thank You, for giving your feedback for this Ad
Uninteresting
Irrelevant
Misleading
Offensive
Repetitive
OTHER
Tuesday, 08 March 2022 19:59 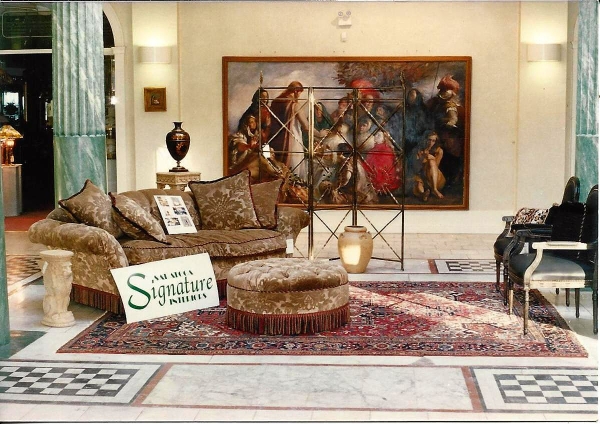 SARATOGA SPRINGS – When Saratoga Signature Interiors opened their doors on Broadway in 1992, Nancy Smith had one goal in mind: providing Saratoga Springs with a place to find quality home furnishings and interior design services.

This April marks their 30th year in business doing exactly that. And, in honor of their 30th anniversary, they are rewinding the clock to take a look at the interior design trends of the last 30 years. From pastels and shiny brass fixtures to the revival of midcentury modern designs and the tiny house movement, they will be revisiting some of the most popular design trends of the last three decades. Hop in the Saratoga Signature Interiors’ time machine and get comfy for your journey back in time!

As the 90s took off, so did Saratoga Signature Interiors. They were busy during that decade working on design projects like The Gideon Putnam Hotel, The Batcheller Mansion Inn, and Amtrack to name a few.

Nancy Smith and Dan Czech of Saratoga Signature Interiors reminisced about these 90s design trends: every kitchen had honey oaks cabinets and honey oak flooring; every bathroom faucet and doorknob were finished in shiny brass; and big frilly window treatments, oversized furniture, and sponge painting were all the rage. The most popular colors of the decade were hunter green, pastel pink, and gray. Through the decades it appears that gray has never gone out of style.

In both home décor and dress, Ralph Lauren’s career took off as the “preppy” style gained popularity in the 90s.

While the world was getting online, trends started shifting towards more ergonomic designs. The digital age was born, and it very much became the driving force for design both in the workplace and in the home. Suddenly families needed a place for their new home computers to go, and since most households owned only one at the time, it needed to be in a centralized location. Herman Miller created the famous “Aeron” chair, and it’s ergonomic and futuristic looking design was a must-have for the cutting-edge business and home office alike.

This journey back in time lands next in the early 2000s, which brought with them the housing market crash, popular sitcoms like “Madmen”, and a shift to more minimalized interiors. In fact, Axel Vervoort’s peaceful and minimalist design will become the most copied look of the next two decades.

The early 2000s were a very exciting time period for Saratoga Signature Interiors. Nancy was named as the exclusive designer for the 38 High Rock Hotel and Condo project completed in Saratoga in 2009. As they were busy working on that project, design trends were shifting.

The show “Madmen” took off in popularity, driving Midcentury Modern design, popular in the 1950s – 70s, out of retirement. Suddenly, every businessperson wanted Don Draper’s office, and every homeowner wanted Betty Draper’s living room. Thayer Coggin furniture, made famous by Milo Baughman’s revolutionary Midcentury Modern designs in the 1950s, was selling like hotcakes.

In the same breath, the housing market and stock market crashed in 2008. The housing crisis brought with it a new trend – the tiny home movement. Even if you didn’t jump at the idea of living in a tiny home, you might have subscribed to the idea of living with less; exchanging oversized furniture with big, rolled arms for new sleek, streamlined pieces. A minimalist movement began and brought a new sense of calm. Relaxing colors such as light brown, tan, shades of white and blue, blue-grey, and blue greens were very popular.

As sure at the changing of the seasons, interior design trends are ever shifting, and current events often are the driving force of change. It comes as no surprise that COVID has vastly changed the landscape for all industries, and interior designers are working hard to keep up.

Production times are taking as much as 10x longer than what they used to be pre-COVID. It’s no wonder why Saratoga Signature Interiors’ customers have shifted to purchasing more in-stock items, leaving custom orders for another time. Families are spending an incredible amount of time at home, and that comes with added wear and tear on upholstery. Customers are looking for comfortable seating that will hold up to the added stress of extended use.

Outdoor areas have become an important part of the home, adding much needed space and a relaxing change of scenery. Saratoga Signature Interiors has seen a push for outdoor furniture, seating, and dining in the last two years. Customers are looking for a way to get out and enjoy, without wandering too far from their home.

Looking to the future there is no telling what interior design trends might pop up next, but one thing is for sure: Saratoga Signature Interiors will be ready to provide their customers with everything they need to make their house a home. They would like to extend a thanks to the community for allowing them to serve as Saratoga’s leading interior design and furniture showroom for the past 30 years.

Read 218 times Last modified on Tuesday, 08 March 2022 20:02
Tweet
Published in News
More in this category: « $400,000 Donation Helps Wellspring Counter Wave of Domestic Violence Welcome to the World of Esports »
back to top