Thank You, for giving your feedback for this Ad
Uninteresting
Irrelevant
Misleading
Offensive
Repetitive
OTHER
Friday, 11 March 2022 17:27

Welcome to the World of Esports Featured 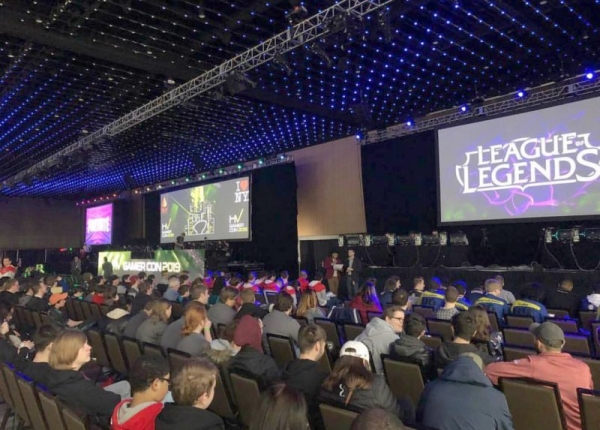 CAPITAL REGION – The Capital Region’s Digital Gaming Cluster continues to expand in 2022. Not only has large studio employment increased, but the region’s esports footprint is getting bigger with HV Gamer Con returning to the Albany Capital Center this month and new gaming facilities coming to several local colleges and universities, including a 4,000 sq. ft. state-of-the-art arena at the University of Albany.

The Center for Economic Growth (CEG), a nonprofit, regional economic and business development organization that serves as the primary point of contact for businesses interested in growing for moving to New York’s 8-county Capital Region, released the following report on the ways that the Capital Region is innovating the world of esports.

“CEG, together with our academic, industry, regional, and NYS partners, markets the Capital Region as a rapidly expanding game development cluster where talented individuals, independent studios, and large established studios, and publishers can achieve their goals in a compelling and collaborative region,” said CEG President and CEO Mark Eagan. “With the proliferation of AI, simulation and game application to industries well beyond games purely as entertainment, our Capital Region Digital Gaming Cluster is poised for additional dynamic growth as we emerge from the pandemic.”

In 2021, CEG launched www.GameOnNY.org to showcase the region’s digital gaming assets and to attract investment, new studios, and talent. In 2022, CEG will be building out the GameOnNY website, turning it into a more in-depth portal, ultimately encouraging more game studios and developers to invest or relocate to the Capital Region.

Last year, Velan Studios, headquartered in Troy, released its second title, Knockout City, which was nominated Online Game of the Year at the Academy of Interactive Arts and Sciences’ DICE Awards, commonly referred to as the “video games Oscar”.

Also in 2021, Blizzard’s Albany studio, formerly known as Vicarious Visions, launched Diablo II: Resurrected, that brought a remastered version of the classic game to PC and consoles and achieved the highest record first week sale of any remaster from Activision Blizzard. In Saratoga Springs, PUBG Madglory worked on a major initiative to release PUBG as a Free to Play (F2P) game last January.

Some other big studio news from the past year and the year ahead includes Krafton Game Union, the Saratoga Spring’s studio’s parent company, recently making its IPO on the Korean Stock Exchange in August 2021.

Jahnel’s digital gaming unit over the last 12 months reaped $16 million in revenue and is serving six different studios/logos with active projects. Over the next 12 months, the Schenectady company plans to hire more development/engineering workers and grow a significant number of new clients/projects.

“The Capital Region has an amazing pool of seasoned workers driven by a vibrant community of existing developers as well as having tons of up-and-coming talent from local universities,” said Velan President Guha Bala.

“The region has proven that we can build genre defining video games. This is a place where [developers] can have a better quality of life than in LA or NYC, get paid well for doing what they love doing, and have something to show for it,” said Becker.

He added that in 2022, “we will get a physical location for an office and have the best company culture of any of the gaming companies in the region.”

Rushdown is also planning to hire 10 or more employees over the next 12 months.

HV Gamer Con, the largest esports event in the region, will return to the Albany Capital Center (ACC) March 19-20. This will be the first in-person Eastern College Athletic Conference (ECAC) tournament at the ACC since its inaugural event in 2019.

“We are thrilled to have our ECAC Esports Championships return to the Albany Capital Region again this year at the HV Gamer Con,” said ECAC CEO Dan Coonan. “The ranks of our ECAC intercollegiate esports conference has grown to 130 schools nationwide, including 800 teams and 4,000 competitors, and we now span coast to coast and into Canada. But no region within our footprint is more welcoming or better equipped to stage our in-person championships than the Capital Region. We are so appreciative of the support we receive from the State of New York, and we attribute so much our enormous success as an intercollegiate esports conference to that relationship.”

There are 346 local students playing in national collegiate esports leagues, such as the ECAC, the National Association of Collegiate Esports (NACE), and the National Esports Collegiate Conference (NECC).

The region also has 352 students currently enrolled in game development programs, 79 of which are high schoolers enrolled in the Capital Region BOCES’ two-year sequence in Game Design and Implementation. The program will grow to 95 students as Capital Region BOCES prepares to expand the capacity of Game Design & Implementation program when it moves to BOCES’ New Career & Technical Education facility in Albany next fall.

For high school graduates pursuing careers in game development, UAlbany is introducing a new $1,000 merit scholarship for incoming freshman starting in the Fall 2022. UAlbany also plans to build a new 4,000 sq. ft. state-of-the-art facility in its Uptown Campus location, featuring 48 high performance gaming PCs, 18 consoles, and a broadcasting and media creation room. The project is currently in the design stage and the facility is scheduled to open in the fall of 2023.

“Esports provides our students with a wealth of opportunities for engagement here at UAlbany. Not only do students have the opportunity to represent the University in organized competition against schools across the United States, our classes in esports, game design and development are a draw for students interested in pursuing careers in this rapidly growing industry,” said Michael Leczinsky, UAlbany Esports Program Director, Head Coach, and Professor of Practice at the College of Emergency Preparedness, Homeland Security and Cybersecurity.

Learn more about how UAlbany is paving the way in esports by visiting their website at www.albany.edu. For more information about the Center for Economic Growth, visit www.ceg.org.

Read 213 times Last modified on Friday, 11 March 2022 20:29
Tweet
Published in News
More in this category: « Looking Back: 30 Years of Interior Design No Retreat - Welcome to Business Bootcamp »
back to top