Thank You, for giving your feedback for this Ad
Uninteresting
Irrelevant
Misleading
Offensive
Repetitive
OTHER
Friday, 25 March 2022 13:21 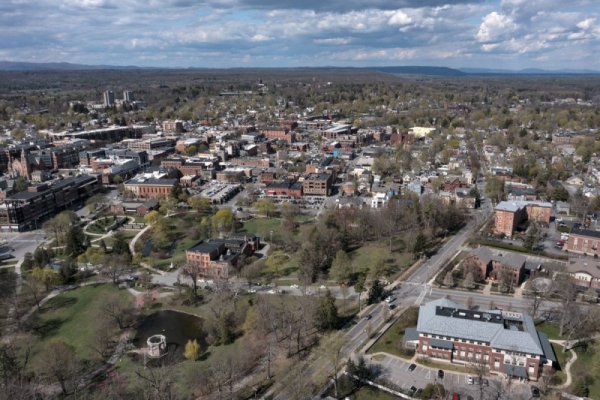 SARATOGA SPRINGS —Ron Kim, who began his first term as city mayor on Jan. 1, delivered the 2022 State of the City Address Saturday, March 19.

Mayor Kim welcomed to the council new commissioners Jim Montagnino, Dillon Moran and Minita Sanghvi, wished a speedy recovery of health to returning commissioner Anthony “Skip” Scirocco, and praised the previous achievements of returning supervisors Tara Gaston (for her public work dealing with the COVID-19 pandemic), and Matt Veitch (for helping pioneer the creation of the Geyser Crest Trail).

The address is generally delivered in February on an annual basis.  “We decided to delay it a few weeks (this year) in the hope that we could meet together safely, without masks,” Kim explained.

“As we emerge out of a two-year pandemic, a deep recession, and local challenges around race relations and civil rights, Saratoga Springs has emerged a stronger, more resilient, and benevolent community and its future is bright as long as we continue to build our community through honest dialogue, hard work, and true reform,” Kim said.

“All of us remember the uncertainty and fear that pervaded this community, this nation, and the world exactly two years ago when we were forced to all isolate and quarantine as a pandemic raged.” Kim noted for their efforts during the earliest days of the pandemic the scores of nameless volunteers in the community who “stepped up, without any mandate or authority and armed only with their zoom account, cellphones, and deep desire to help out our community as it struggled through the unknown.” He also specifically credited for their work business leaders Todd Shimkus of the county Chamber, Darryl Leggieri of Discover Saratoga, Deann DeVitt of the Downtown Business Association, Ryan McMahon of the Saratoga Springs City Center, Samantha Bosshart of the Saratoga Springs Preservation Foundation, and Shelby Schneider – then-President of Saratoga Prosperity Partnership and currently deputy director at New York State Economic Development Council.

Kim listed a variety of projects currently under development or in design during the current year. They include:

Office Of The Mayor

Suggestion 1: Remember YOU are a member of a community speaking to other members of that same community.

Suggestion 3: Be factual. Accuracy and truth are foundations of our democracy.

“We threw the doors open to the mayor’s office and put into practice the phrase ‘All are welcome here,’” Kim said. “Since January 1, we have met with almost 200 people from all walks of life about issues ranging from “Arts Tourism” to the backstretch workers, to land use and zoning matters. The mayor’s office welcomes all Saratogians.”

Working initiatives: establishing greater security in the Caroline Street entertainment zone with the Department of Public Safety; Creating a “hub” for transportation alternatives at the City Center Parking garage that will allow visitors to park their car and then bike, walk, or ride through the city core;  Creating a public/private partnership with the arts community with the goal of establishing Saratoga Springs as one of the foremost arts destinations in the nation; Addressing homelessness by partnering with local non-profits and County officials;; Encouraging the construction of low income and work force housing in the city, and continuing to preserve the city “greenbelt.”

Read 164 times
Tweet
Published in News
More in this category: « Health, History, & Horses: The Podcast Primer at The Pump »
back to top