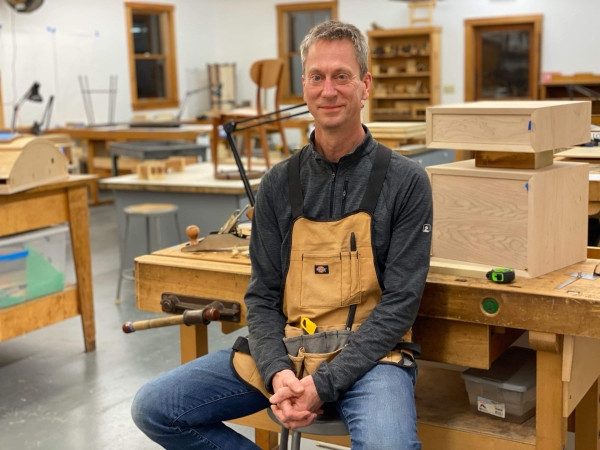 In March, John Haller acquired the building at 69 Caroline Street for $2 million. The 8,700 sq. ft. structure will be the new site of Saratoga Joinery, a nonprofit woodworking center and gallery.

Beginning this fall, woodworking classes and tools will be available to hobbyists, enthusiasts, and trade professionals at the Saratoga Joinery.

“It adds to what is available to people in the community,” said Haller.

“A lot of people have varying degrees of interest in, and engagement with woodworking, but there can be steep barriers for them when it comes to space, cost, and machine maintenance.”

For 21 years, the two-story structure (built in the 1880s) was home to the Saratoga Children’s Museum (which will be relocating to the Lincoln Baths building at Saratoga Spa Park).

By becoming Saratoga Joinery, this building will continue to be a place for learning by doing.

Haller was attracted to the building’s substantial square footage, proximity to downtown foot traffic, and large 25-vehicle parking lot, as well as its historic roots. Since 2019, he has been a board member of the Saratoga Springs Preservation Foundation.

“Saratoga Springs is a community with rich historic resources and has been a leader in the preservation movement. The Saratoga Joinery has the potential to play an important role in promoting the preservation trades in our community and beyond,” said the Foundation’s Executive Director Samantha Bosshart.

The interior renovations are currently planned to include a main floor public woodworking gallery and exhibition space for completed projects.

The first floor will also feature a workshop (with tools including; table and band saws, a planer, jointer, drill presses, routers, and sanding equipment). Upstairs in the Bench Room, there will be space for the planning, layout, and assembly of projects.

Saratoga Joinery is hoping to attract beginners to the space by offering a variety of smaller projects that can be completed in one or two class periods.

THE CRAFTING OF A WOODWORKER

Haller, a successful technology entrepreneur, became interested in woodworking while renovating the 1883 Queen Anne Victorian home on Union Avenue he and his wife moved into in 2016.

The floors, foundation, and structure all needed to be addressed.

Haller found the work (done by builders Bob and Doug Courtney of Robert Courtney Enterprises, and the Phinney Design Group) to be captivating.

“Because they were discovering a new problem every day, there was a lot of real-time problem solving that had to be done, which I found fascinating, and very similar to computer programming,” he said.

“They were so helpful about answering my questions but also let me join in and work on things. Then, when there was a problem to solve, it was just so rewarding.”

He’s also completed woodworking projects at the the renowned Center for Furniture Craftsmanship in Rockport, Maine.

The Saratoga Joinery will complement the woodworking groups already active in the region while appealing specifically to the Saratoga community.

One such trade organization, the Northeastern Woodworkers Association, is a guild with approximately 400 members from the Greater Capital District who has hosted the annual Fine Woodworkers Showcase for 30 years and drawn thousands to the city.

Statistics show that more than 60 percent of woodworkers are men ages 40+. These numbers demonstrate an opportunity to infuse new life into the vocation.

“The reality is, you do have to acknowledge that something’s out of sync there that needs to be addressed,” said Haller.

To encourage more young women to take up woodworking, in addition to offering classes geared to the existing audience, Haller also plans to have classes taught by women for women.

In 1985, while a student at America's oldest technological research university, Rensselaer Polytechnic Institute, Haller co-founded MapInfo, which by the time he left in 1999, had grown to employ 1,100 people and earn $185 million in revenue.

Haller then co-founded SportsSignUp, a youth sports management software platform that employed 30 people, and had 1,500,000 registered users when it was acquired by Time Inc. in 2016 and renamed SportsIllustratedPlay. It is now run by the creators of SportsEngine Inc., an NBC Sports Group company.

In addition to his other endeavors, since 2020, Haller has served on the Board of Advisors for ZEPHYRx LLC., a medical manufacturer in Troy specializing in remote respiratory monitoring equipment.