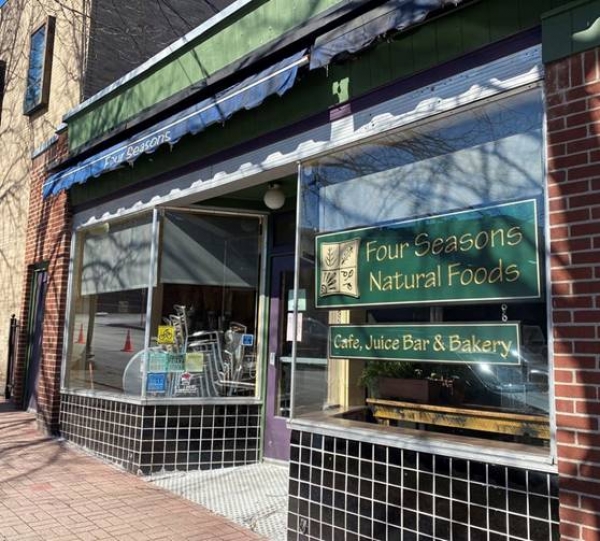 SARATOGA SPRINGS — After serving Spa City customers for more than a quarter-century, a popular Phila Street eatery has closed its doors for the final time.

Four Seasons Natural Foods, which stood at the corner of Phila and Putnam Streets since 1990, is in the contract process of being sold to new owners.

“In the restaurant business, it’s a crazy ride,” says owner Richard Frank. The store portion of Four Seasons was relocated in 2014 to 120 Henry Street – where it has and will continue to operate - and the Phila Street location was re-configured into the Four Seasons café.

In 2020, the COVID-19 pandemic spread across the country, and like many other businesses, the Phila Street venue was affected. “Everybody took a hit in sales, but as far as ours, last summer we were doing about 25% of what we had been doing the summer before,” says Frank, who grew up in Pennsylvania and was introduced to Saratoga when he began spending summers here at the age of nine.

Four Seasons was launched in 1988 near Caroline Street and Broadway and relocated to Phila Street in 1990 when Frank joined the store, leasing it for a handful of years before eventually purchasing the building in the mid-1990s. A relocation of the Four Seasons “store” to 120 Henry Street was made in 2014, with the Phila Street location moving into its “café” phase. The company scaled back during the pandemic in 2020 and closed its Phila Street doors in November.

“The moral of the past year is that you have to be flexible. What we thought we know, we don’t, and you have to be able to adapt,” Frank says.  “I was sort of waiting to see what would happen next when a nice couple came and offered to buy the building. It made sense.”

The sale is under contract and as for future use, the expectation is the couple purchasing the building are interested in a retail endeavor. Since the 1930s, the single-story building has served as meat market and a grocery store, a military recruitment center, a wine store, and as Mrs. London’s Bakeshop and Restaurant during the 1980s.

“We were there 31 years, but overall, I think it’s great because the people seem super-excited and it’s great to see someone who’s going to love the building. It’s a great corner,” Frank says. “It’s definitely a loss of a casual vegan restaurant,” Frank acknowledges; however for Four Seasons at 120 Henry St., life goes on.

“We’ve always done sandwiches and soups and we’ve been augmenting our kitchen a little. We do our desserts at the café, but we’re going to be able to do them here. Over time (post-pandemic) we might be able to re-organize and have some sort of casual eat-in,” he says. “To some extent we’re not really doing anything different; yes, the café is a big piece that now won’t be part of us, but we’re still in business, we’re still doing food, I still have food service I believe in and we serve good products, so it’s not an end of the road or anything like that. If anything, it’s better here, better for our staff and better for our customers.”