Thank You, for giving your feedback for this Ad
Uninteresting
Irrelevant
Misleading
Offensive
Repetitive
OTHER
Monday, 09 May 2022 13:19 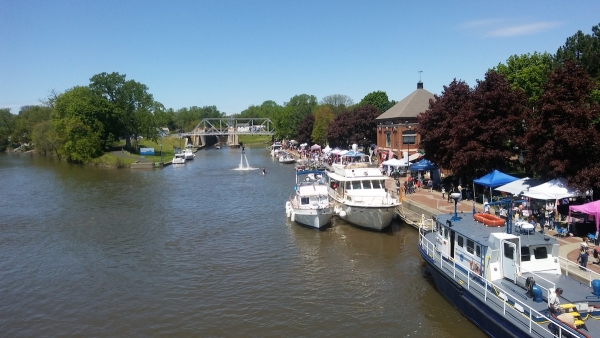 A 2019 view of the Waterford Canal Festival, where an estimated 7,000 people enjoyed two days of beautiful spring weather and celebrated the annual reopening of this vital inland waterway.  Cancelled for two years by the COVID crisis, the Festival is returning this year to bring excitement to the public, and a visual reminder to all that New York State’s Canal System is a vital component of the unique infrastructure of the Empire State.

The New York State Canal System and its 524 miles of scenic inland waterways are a unique resource that differentiates our state and especially our region from other parts of the country.   For much of its history, the canals were a vital transportation Thorofare for commercial vessels. Many of us believe that, if maintained and kept intact with a long enough operating season, they can once again be part of the supply chain that keeps our industries running and connected to America’s interior. These days, various economic factors have reduced commercial traffic to a minimum, and most of the users of the Canal System are of the recreational variety. Still, there is enough interest in the waterway that its status as an integral part of upstate New York’s transportation network remains intact.

There are some undesirable users of the Canal System though: invasive species, such as plants, mussels, and certain fish, which take advantage of the interconnectivity between bodies of water to move into and threaten inland lakes and rivers. Such a concern] was raised by environmental groups over the round goby, a small, voracious fish that has been discovered in the lower Hudson River as well as the Great Lakes.  This is a concern because it can impact fisheries and the food chain. Some of the remedies suggested earlier this year involved physically closing and permanently blocking off sections of the Erie and Champlain Canal on the Mohawk and Hudson Rivers.  With the canal system having been intact and contiguous for nearly 200 years, the idea of closing it is a major concern for business interests, and New York State officially announced last month that all Locks would remain open, though with modified procedures at some key locations to flush the water downstream more thoroughly and keep any pesky gobies away from places they shouldn’t go.

Capital Region Chamber President and CEO Mark Eagan submitted a letter in March to Governor Kathy Hochul, outlining the Chamber’s position on balancing invasive species management with the need to keep the canal in full, contiguous operation. “The Chamber strongly believes that keeping the entire canal system open and fully navigable by recreational and commercial craft throughout its entire length is of equal importance to any other consideration,” said Eagan. He also later stated that “Waterways around the world employ various barriers and monitoring systems that don’t impede navigation of all vessels, nor do they sever the waterway with a physical barrier. Therefore, we support research into and the development of strategies to minimize invasive species risk while keeping the waterways fully and contiguously open from “end to end” for recreational and commercial uses.”

In the opinion of this writer, whose first experience on the Champlain Canal was in 1975 at age 10 on a voyage from Downstate aboard Dad’s brand-new cabin cruiser, one of the very real problems canal advocates have is the relative lack of knowledge among many local residents of the waterways that run through their communities. Many officials, charged with making decisions that impact the future of the waterway and the businesses alongside it, have literally never been on it. And even more have never been through a Lock, again in some cases through an entire career in community leadership. Canal Director Brian Stratton used to do a very useful and interesting annual inspection tour of the canals aboard a large vessel capable of carrying many guests, and it was interesting to see the reactions of officials who had spent their lives as “landlubbers” now experiencing the waterways for the first time.

Similarly, the annual Waterford Canal Festival, a celebration of the opening of each navigation season, has afforded a great opportunity in recent years for hundreds of people (adults and children) to get a free ride on a charter boat and be introduced to the canal. Thanks to some generous support by sponsors, this year will once again feature boat rides as well as a kid’s fishing clinic.  All will be free to participate.  These are fun events, with plenty of food, vendors, interesting exhibit and, with a little luck, plenty of sunshine along the busy waterway. But most of all, they are educational opportunities. The more people understand the value of the canals, the less likely people will be to support its closure.  And that is a good thing for all of us.

Read 50 times Last modified on Monday, 09 May 2022 13:24
Tweet
Published in News
More in this category: « 400 Apartments Proposal at Wilton Mall The Wait Is Over: GlobalFoundries Expansion Details »
back to top