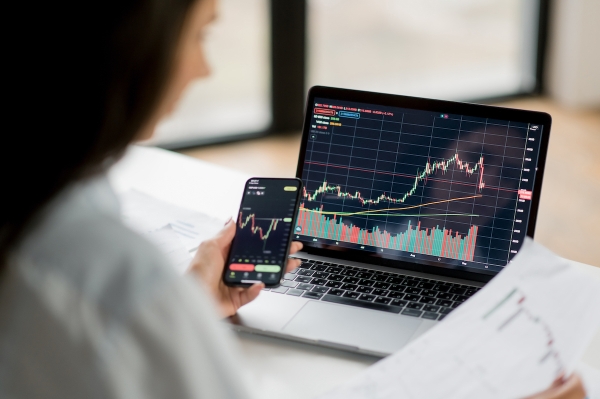 The economy continues to be the topic on the minds of everyone, as market volatility continues to try the patience and fortitude of investors across the spectrum. During these times, more than ever, it’s important to remember to take the long-term view.

Fear is a greater motivator than greed, although both tend to inspire irrational choices. It’s May 9 and, as I write, the S&P is down more than 15%, and the NASDAQ is down more than 25% year-to-date. While it may seem like the economy is on the precipice of calamity, when we take the long-term view, we remember that markets rise and fall but, so far, have a perfect track record of recovering and finding new highs. Market participation is required to benefit from those rebounds.

As we continue to move through the year, we see more volatility on the horizon. Markets are efficient over the long-term, but are trying to make sense of competing data and find direction in the near-term.

We expect the Fed to continue to raise interest rates in an attempt to rein in the highest inflation levels in the last forty years. In simplest terms, interest rates are the price of money. When you raise rates, you slow down the rate at which money flows through the economy. With too much money in the system, slowing down how frequently each dollar turns over is a way to help reduce inflation.

The Fed didn’t create the problem, but it was late to the party when it came to addressing it. We’re in our current predicament because of Congress’ wanton stimulus during the pandemic. We can debate the efficacy of the stimulus, but in the end it’s moot because, warranted or not, the result is runaway inflation.

So, as rates increase, the markets are left with the task of trying to gauge the impact on the overall economy, as we wait to see if the Fed can slow inflation without putting the economy into a tailspin. Because markets tend to overcorrect, in the short-term, we think we will continue to see larger than average swings in the markets on a daily basis.

A word on Fridays: It’s important that investors generally take Friday performances with a grain of salt. Consider that markets are generally closed over the weekend. That means any major developments that occur over those two days could leave investors holding an asset they can’t sell until Monday. For that reason, you will often see bigger dips on Fridays than are warranted, as wary traders may sell as a precautionary measure. Conversely, we generally interpret an up Friday as a positive sign.

We expect the Fed to raise rates another 1% between now and August, then to take break as the election season hits high gear, in an attempt to not appear partisan.

As rates continue to increase, we expect that many bonds, and bond funds, especially, will continue to be clobbered. For conservative investors who have been trained to believe that bonds are “safe”, this may come as a surprise. Simply put, bonds issued at lower rates become less attractive compared to newer bonds issued at higher rates. In a rapidly rising interest rate environment, it may make sense to tactically hold cash as a proxy for bonds.

As the Fed winds down for the summer, markets will be turning attention to the upcoming election. As it stands, many are predicting a massive Republican majority in the House, and a slim majority in the Senate. Remember, markets don’t necessarily care who wins. What markets care about is certainty that the rules won’t change dramatically, confounding the plans of business. With the President holding veto power, and Republicans holding less than a veto-proof majority, the options are either compromise or gridlock; both are positive for markets, and should help promote better fiscal policy.

Life is long; we’ve been here before, and we’ll be here again. During times like these, that is an  important thing to keep in mind. It’s also during times like these that you should be working closely with your CFP® Professional to help ensure your portfolio is positioned to weather the volatility and that adjustments are made to capitalize on pockets of opportunity and, we believe, eventual recovery.

The information provided here is for general informational purposes only and should not be considered an individualized recommendation or personalized investment advice. Forward-looking statements are subject to revision. This material is not intended as an offer or solicitation for the purchase or sale of any security or other financial instrument. Investing is subject to risks including loss of principal invested. Past performance is not a guarantee of future results. No strategy can assure a profit nor protect against loss. Securities offered through Cadaret, Grant & Co., Inc. Member FINRA/SIPC. Advisory services offered through Sterling Manor Financial, LLC, or Cadaret Grant & Co., Inc., SEC registered investment advisors. Sterling Manor Financial and Cadaret Grant are separate entities.