Thank You, for giving your feedback for this Ad
Uninteresting
Irrelevant
Misleading
Offensive
Repetitive
OTHER
Thursday, 02 June 2022 20:16

When the People Return to Saratoga Featured 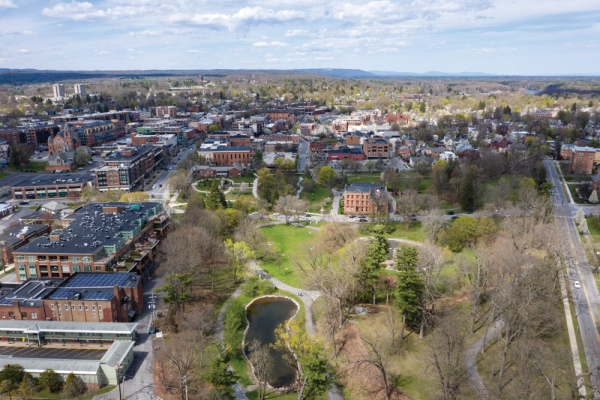 The economy of Saratoga Springs counts on people coming, and recent indicators show that they are coming back. According to the April STR (pronounced “STAR”) Report, published by STR, LLC;  hotel occupancy in Saratoga hit 48.7 percent for the first four months of 2022, an increase of 25.3 percent over last year, and falling short of 2019 pre-COVID results by 2.2%. Occupancy for the first four months of 2020 was 38.6 percent and in 2021 38.9 percent.

“We started to see some traction in 2021,” said Darryl Leggieri, president of Discover Saratoga, the city's convention and tourism bureau. “But the protocols that were in place were a heavy lift for meeting planners and our hotels. The Omicron variant put a crimp in January and February 2022, but once our clients saw that the vaccines were working they gained more confidence and started to say let's go, let's make this happen. March was a huge month for our hotels. Group and leisure travel were there and our rates were strong. Occupancy hasn't quite caught up to pre-COVID levels, but revenue was strong because of the rate.”

Last week the Empire State Society of Association Executives (ESSAE) held their annual meeting and trade show at the Saratoga Hilton and Saratoga Springs City Center. New York State Associations represent the largest group market in Saratoga and throughout New York State. “We are thrilled to be here,” said Vanessa LaClair, executive director of ESSAE. “We kept in close contact with our members and partners throughout the shutdown, but being together in person, especially now, has a dynamic you only get at an event like this.” While there are challenges to be worked through, such as staffing issues on both the hotel and association side, LaClair said group events have always required partnership between planners and suppliers and those partnerships have become even more important.

Attendance at the ESSAE event reached about 75-80 percent of pre-COVID numbers. These results are echoed by local hoteliers. “That is about what we are seeing,” said Kevin Tuohy, general manager of the Holiday Inn Saratoga Springs. “That's a fair estimate on the group and leisure side in terms of attendance and room occupancy. Higher rates have allowed us to generate good revenue. It's a hopeful picture and I hope we keep going on this trajectory.” While Tuohy said that catering revenues have not come back as strongly, one supplier commented that they have 59 weddings on their books for 2022. “That's pent up demand,” Leggieri said. “As soon as they got the green light people who wanted to get married over the last two years jumped on it. That should cause a domino effect for at least a couple more years.”

One significant trend is an uptick in corporate group business. These are short-term leads that can fill soft periods during the year since corporate groups tend to book in the same year their event takes place. It can also be challenging to find dates that work for the group and hotels. At the same time corporate individual travel has not returned as quickly. “Companies saved a lot of money on travel over the last few years,” Leggieri said. “The CFO's have enjoyed the reduced travel cost, but it's important for sales and service people to get out and see their customers again. It's coming back slowly.” As a result there is a new trend in hospitality: Bleisure travel where a few days of leisure for relaxation are combined with a business trip. “Saratoga is ripe for that kind of traveler,” said Leggieri.

As Saratoga heads into its busiest season, focus shifts to the leisure traveler as Saratoga Performing Arts Center, the Race Course and other attractions open for their seasons.  “Indications so far are that the hotels are looking strong for the upcoming season,” said Todd Shimkus, president of Saratoga County Chamber of Commerce. “Saratoga is a strong drive-in market, being only three hours from New York City and Boston. In 2020 there were many states that couldn't travel to New York. We focused our marketing efforts more locally and regionally. We promoted outdoor recreation and dining: our lakes, trails and parks. There is still a percentage of people who are anxious and we continue to focus regionally because downtown Saratoga is seen as a reachable, desirable destination.”

While the emergence from COVID-19 restrictions has been a major factor in Saratoga's recovery, collaborative efforts by local economic agencies made sure that the city was positioned to jump start when the time came. Discover Saratoga kept most of its sales team in place during the shut down, staying in contact with clients who had group contracts in place to plan for the future. “We thought it would only be a month or two,” Leggieri said. “It became a full time job rescheduling groups four or five times.”

Some results from these collaborations are the accommodation of outdoor dining and picnic tables added to Congress Park, making it a more attractive place within the city for people to gather. In addition, two new events have been created. “Altogether Now” is an arts event June 2-5 to celebrate the reopening of Saratoga's arts and culture organizations.  “Cars on Union” is a collaboration with the Saratoga Automobile Museum that will close a portion of Union Avenue with a car show and procession on June 18.

“We are fortunate to have a walkable city with a rich cultural community,” Shimkus said. “And, just as important, a community that is willing to work together for the benefit of our visitors and our residents.”