Thank You, for giving your feedback for this Ad
Uninteresting
Irrelevant
Misleading
Offensive
Repetitive
OTHER
Monday, 18 July 2022 13:24 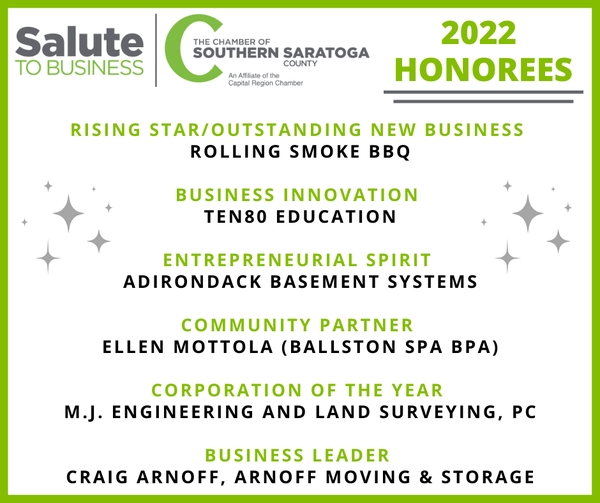 In June, the Chamber of Southern Saratoga County (CSSC) held its annual “Salute to Business” awards at the Hilton Garden Inn in downtown Clifton Park, an event that coincided with the 55th Anniversary of Clifton Park and Halfmoon’s local and official chamber of commerce.  Six award recipients were recognized, plus two corporate milestones achieved by local businesses.

The enthusiastic audience who attended enjoyed food, drink and networking, some comments by CSSC Chairman Christopher Dowd of Ballston Spa National Bank and Paul Milton of Presenting Sponsor Ellis Medicine, and then were treated to a special awards presentation led by Channel 13’s Subrina Dhammi, who interviewed those being recognized that evening.

Rising Star/Outstanding New Business Award (Rollin’ Smoke BBQ, Halfmoon): Recognizes a business in operation three years or less that demonstrates commitment to the community and exhibits potential for long-term success. Rollin’ Smoke has been in such high demand that owner Rob and Amy Carmel were unable to attend that evening, but a day later representatives from the Chamber, the Town of Halfmoon and State Senator Daphne Jordan visited them to present the award in person.

Entrepreneurial Spirit Award (Adirondack Basement Systems, Halfmoon): Recognizes small business members who have exhibited a talent and passion that has resulted in outstanding success. Kevin Koval and his family enthusiastically attended the event and were excited about the recognition.   Kevin is well known for his skills as an entrepreneur and his generosity in supporting the community he and many family members call home.

Community Partner Award (Ellen Mottola, Ballston Spa BPA): Recognizes an individual or organization that has shown significant commitment to partnering with other public and/or private entities to further the development of Southern Saratoga County. Ellen demonstrated her skills, community spirit and leadership for 17 years as Administrator, and it was very fitting to see her recognized in this, her retirement year.

Corporation of the Year (M.J. Engineering and Land Surveying, PC, Clifton Park): Recognizes a business that distinguishes itself through achievements in growth and management and have been in operation for more than 5 years. M.J. Engineering has distinguished itself in many ways, and is the official engineering firm for many area communities.

Business Innovation Award (Ten80 Education, Schuylerville): Recognizes a business that has utilized innovation to develop a new market, product or service.  Ten80 Education, based in Schuylerville, is having national impact, working with many groups such as SEMA, MECUM and Barrett-Jackson auctions, the US Army, SME, and others.

Business Leader Award (Craig Arnoff, Arnoff Moving & Storage, Malta): Recognizes an individual for exemplary business acumen, leadership and results.  Craig and his family are known for their support of the community, and their business acumen.  Arnoff is also a company that spans the entire Hudson Valley, with their offices in Poughkeepsie and Malta.  A proud New York mover since 1924, Arnoff Moving and Storage has helped move thousands of families and businesses and their service area continues to grow. Not only are they the oldest and fastest growing Hudson Valley, New York mover, they have extended their reach into Connecticut, Massachusetts, and even down to Port St. Lucie, Florida!

A selection committee made up of local businesspeople assisted with the nominations.  Also recognized for business milestones were Morris Ford (Burnt Hills), 50 years, and MLB Construction (Malta), 75 years.

View the embedded image gallery online at:
https://saratogabusinessreport.com/component/k2/item/662-southern-saratoga-county-s-salute-to-business-recap#sigProId703090bf73
More in this category: « Dehn’s Flowers Celebrates 130 Years Saratoga County Board of Supervisors Gives Grant to Assist Kids »
back to top