History of the Luther Forest.  Featured 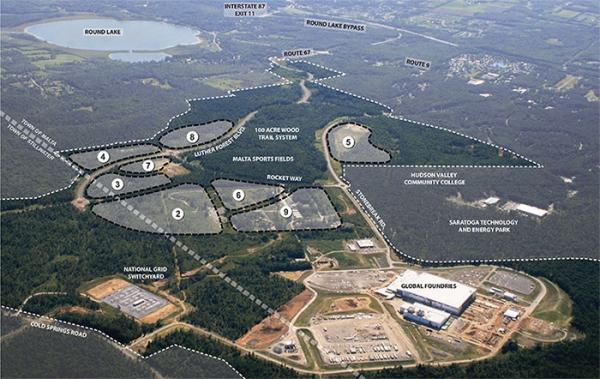 There is much ado about the semiconductor industry these days. While countless businesses had been on hold or shut down due to the COVID-19 pandemic, computer chip maker GlobalFoundries is seeing boom times. News that GlobalFoundries plans to invest $1.4 billion into fab expansion amid the current rise in chip demand is dominating headlines

GlobalFoundries’ success isn’t unusual for the computer industry overall, and part of that is due to the pandemic. With so many people working from home, there has been huge demand for new laptops, as well as smart phones and other electronic devices that keep one both plugged in to the workplace and entertained in off hours. The pandemic has also exacerbated the weakness of the U.S. chip supply, forcing auto makers to idle factories as chip supplies have dried up. Because of this and many other factors, we are now facing a global shortage of semiconductors. The semiconductor industry going into Covid was projecting a 5% annual growth rate for five years. They’re now projecting that to almost double now. It’s not a one-time thing. It’s a structural shift, that the pervasive need for semiconductors is accelerating.

The high demand for chips has led to the possibility that GlobalFoundries may expand in Malta. The company, which is owned by the emirate of Abu Dhabi, said it had secured an option for 66 acres of undeveloped land adjacent to Fab 8. GlobalFoundries said it could invest $1.4 billion in new production, which will be divided evenly among its fabs in Dresden, Germany, Malta, New York and Singapore, and will see increased output through 2022.

President Joe Biden released his $2 trillion federal infrastructure plan Wednesday that includes $50 billion for the National Science Foundation, including a reported $37 billion for the U.S. semiconductor industry, spending that could lead to a new computer chip factory in Saratoga County and federal semiconductor research center in Albany.

So how did we get here? Over twenty years ago, New York State, the Capital Region made a bet that investing in the attraction of the semiconductor industry would offer a significant return on investment.

In 1995, the Empire State Development Corporation, Center for Economic Growth (CEG), and Niagara Mohawk (now National Grid) jointly responded to a Request for Information seeking to locate a Samsung DRAM chip plant in the United States. New York was eliminated from the competition for the Samsung plant, but feedback from Samsung convinced regional economic development leaders that New York could be a real contender in the global competition to secure a chip fab facility.

Initially, New York’s leaders hoped to lure a chip fab to the Rensselaer Technology Park in North Greenbush. But in 1999, the North Greenbush community rejected plans to allow a fab to be built there.

In 2000, the Saratoga Economic Development Corporation (SEDC), led by Ken Green and Jack Kelley, stepped into the race and proposed the Luther Forest property in Malta and for over a year, secretly began acquiring options to purchase property owned by the Wright Malta Corporation and over a thousand acres of pine forest owned the Mackey family at Luther Forest. Many who lived in Malta considered the pine forest forever wild, but the property had a rich history in high-tech initiatives.

In 1898 Thomas C. Luther began buying up old farms and growing pine trees for the timber industry.  With over 7,000 acres, Luther created one of the largest pine forest plantations in the northeastern US. In the 1940s, Luther contacted the federal government and offered some of his land as a site to test rockets and rocket fuel. After WWII, the US government was operating a secret military intelligence program called Operation Paperclip in which more than 1,600 German scientists, engineers, and technicians, such as Wernher von Braun and his V-2 rocket team, were taken from Germany to the United States. These personnel were former members, and some were former leaders, of the Nazi Party. The primary purpose for Operation Paperclip was U.S. military advantage in the Soviet–American Cold War, and the Space Race.

In 1945 the Luther Forest became the home of the Hermes Project Rocket Test site. Von Braun’s team and 400 General Electric scientists worked at the Malta Rocket Test Station to help the U.S government improve upon Germany's expertise in missiles. The work at the rocket test site was known as Project Hermes, named after the messenger of the gods in Greek mythology. The Hermes project lasted until the 1960s, but before it ended, scientists began working on another project, the Vanguard propulsion system, the United States' first attempt to launch a satellite after the Soviets launched Sputnik in 1957. Von Braun, who eventually became the director of NASA's Marshall Space Flight Center and was the chief architect of the superbooster that launched American astronauts to the moon, came to Malta for weeks at a time to review the progress made by the scientists. Back then, locals would recall hearing the ground rumble and smoke fill the air as rockets were set off go off.

In 1964, the New York State Atomic and Space Development Authority, a precursor to the New York State Energy Research and Development Authority (NYSERDA), bought the site and eventually another 280 acres by eminent domain.  Two decades later, when the state was selling the land to Wright Malta, it was discovered that the site's water supply system and wells were contaminated. It was placed on the U.S. Environmental Protection Agency's Superfund list as a high priority for cleanup. In 1999, it was removed from the list following remediation.

When GE pulled out of the rocket initiative, scientists that worked at the site and create a new company, Wright Malta Corp., which tested weapons and sound abatement systems up until the early 2000’s.

After the campus zoning was approved, a regional economic development team began actively marketing the Luther Forest Technology Campus to the global semiconductor industry. The site was evaluated by numerous companies including Samsung, Intel, Micron and eventually Advanced Micro Devices (AMD). In the spring of 2006, a team from AMD came to evaluate the campus, along with other potential sites in New York. After a $1.4 billion incentive package was offered to AMD by New York State, on June 23, 2006, AMD announced plans to build its new $3.2 billion chip plant and create 1,300 jobs at the Luther Forest Technology Campus. This deal would be the largest private sector industrial investment in New York State history.

In 2008 AMD spun off their semiconductor manufacturing business into a new company temporarily called The Foundry Company.  The Advanced Technology Investment Company (ATIC), owned by the emirate of Abu Dhabi, purchased AMD's semiconductor manufacturing business and in 2009, GlobalFoundries was officially announced. The company broke ground on their Fab in Luther Forest in June of 2009 and has since created over $15B in capital investment and 3,000 jobs with an average salary of $90,000 per year.

Last week, Intel announced it is launching a major research program with IBM at Albany Nanotech, home to SUNY Polytechnic Institute, which trains the next generation of semiconductor engineers and scientists.

Senate Majority Leader Chuck Schumer of New York has been leading the charge to convince Intel, GlobalFoundries and other chip makers like Samsung to build new chip fabs, short for fabrication plants, in the United States as part of a concerted effort to ensure the Defense Department and the U.S. electronics industry have a secure and sustainable chip supply.

A second fab at Luther Forest would likely receive billions in federal incentives if Schumer's plan comes to fruition.